Buffalo shuffled their offensive line several times in the preseason. How did the new group do in its debut against the Bears?

The Buffalo Bills had a brand new offensive line in their season opener against the Chicago Bears last weekend, lining up a combination of five players for the first time in front of the public. Cordy Glenn, Chris Williams, Eric Wood, Erik Pears, and Seantrel Henderson had all seen varying levels of practice time during training camp due to positional shakeup and injuries, and so the question on everyone's minds coming into week one was how well they would play together in their first game action.

As far as the box score indicates, things went alright. The offense had an efficient day, rushing for 193 yards and a touchdown at a robust rate of 5.8 yards per carry, and only surrendering one sack. But how did the line really play? I went and re-watched the game tape this week, and here are my thoughts on the three "newcomers" to the line: Williams, Henderson, and Pears at his new position.

Pears was a disappointment, for sure. I had heard good things from training camp and had hopes that he had improved his play from 2013 and would be able to hold down a starting spot for another year. Then, Doug Marrone decided to play him at right guard, a move I definitely take issue with. I understand the idea of "play your five best guys," but Pears is 6'8" and is not an explosive athlete. He's going to get pushed around by shorter defenders, he'll be unsteady on his feet in a more crowded area, and he'll struggle pulling across the formation or navigating to the second level at times. Right guard is an area of weakness for the line in this game.

Pears had at least one bad block on almost every drive - usually an issue of not being able to sustain the block and drive his man away. Defenders seemed to have an easier time of disengaging, at least partway, to make a tackle attempt. Maybe this is a product of Pears spending his whole career on the edge of the line - on the outside, it's more forgiving to disengage from a guy if you've already pushed him past the pocket.

Here's one example of Pears not being able to sustain. The Bills start out in a full house formation with C.J. Spiller as the running back and Frank Summers and Chris Gragg also in the backfield.

The way the blocking is set up, Spiller has to read a defender, continue in the flow of the play, or take a cutback lane. The linebacker commits to the play side, so Spiller starts his cutback. The blocking on the left side looks good - it's not great, but for a guy with Spiller's athleticism, it's workable. Unfortunately, there's a problem on the right: Pears didn't drive his defender very far, and that defender is about to disengage.

There's all kinds of daylight in front of Spiller, but he doesn't have enough time to get there. 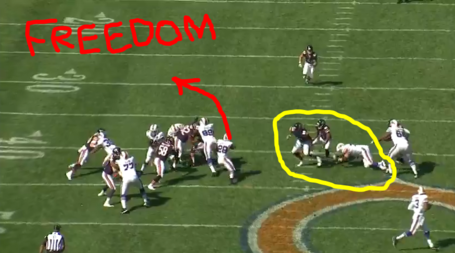 The defender bursts forward to make the tackle. A 40-yard run turned into a four-yard run.

Williams didn't raise much issue from me in this game, which was a pleasant surprise. All in all, he had a perfectly cromulent game, and the less you hear about a lineman, the better he's probably playing. If I had an issue with his play, it was definitely how slow and uncoordinated he could be getting to the second level or getting in position for a screen play. I distinctly wrote down that it was a problem on four plays in my notes, which means it was probably happening a few more times than that. Clean those up, and I have no issue with Williams as a starting guard this year.

Here's an example of where Williams' movement could've led to a big play if it had been crisper. Instead, it led to a failed third down conversion. The play is a screen pass to Fred Jackson on the offensive left.

Sammy Watkins (off-screen) does his part, clearing out the cornerback to the play side, and that leaves Williams as the only lead blocker on the screen play. All of the other blocks go smoothly, and the other defenders are sufficiently fooled, so if Williams can just get in the way of the defender there, Jackson will have room for the first down.

Williams lumbers out to position, but his cut block attempt is easily avoided by the defender, who closes quickly for the tackle.

The sense I got from Henderson was the feeling I get watching the average day one or two draft pick who starts as a rookie - he has talent, he has some skills, and he has some refining to do before you can stop worrying about him. Henderson made probably the most mistakes of any of the players I scouted, though not all of them were very egregious. The mistakes were kind of across the board - sometimes he would lean forward or bend at the waist and lose his leverage, sometimes he wouldn't anchor well, and sometimes he'd forget to make a secondary block. The positives were good, with plenty of plays where I could just ignore him knowing that he would seal off the edge just as effectively as his teammate at left tackle.

Let's take a closer look at one poor play from Henderson. This was the only sack given up by the line during the game. The Bears start by showing plenty of bodies in the box, but the back four all drop into zone coverage as Chicago only rushes their linemen. 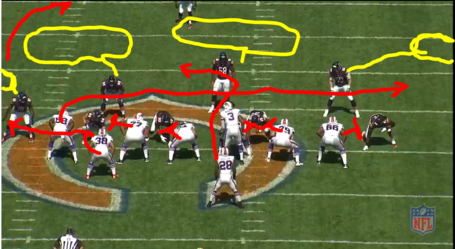 This play is all about the one-on-one battle between Henderson and Willie Young on the right side of the picture.

Watch Henderson's feet as he takes his next step while holding off Young.

They're close together, compared to Buffalo's other linemen. This is where I think the sack started. A wider base gives a lineman more balance, helping him against speed rushers. Young starts to pull around Henderson, so the rookie takes another step to broaden his base - but Young rips his arms aside, Henderson was leaning forward and to the left, and Young comes free to pursue Manuel for the sack. 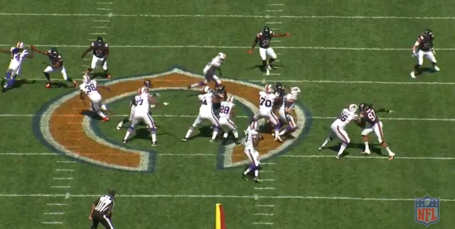 Sometimes, even a little mistake like that is all it takes to lead to a sack in the NFL.