How the Buffalo Bills have utilized Sammy Watkins (so far)

Sammy Watkins had a fairly quiet NFL debut in Chicago (3 receptions, 31 yards). How, exactly, did the Buffalo Bills go about using their top receiver in his first game?

Share All sharing options for: How the Buffalo Bills have utilized Sammy Watkins (so far)

Sammy Watkins participated in all but one of the Buffalo Bills' passing plays in Week 1. He was targeted just four times and had three receptions for 31 yards. On those passes, Watkins was five, one, 19, and 40 yards past the line of scrimmage.

Overall, Watkins gained just six yards after the catch, and they all came on his third and final reception. Watkins’ first two catches didn’t allow for any post-reception yardage.

The first reception, an out pattern in the red zone, showed a solid trust and understanding between EJ Manuel and the rookie receiver. Manuel threw the ball as Watkins made his break. The ball arrived just after Watkins turned to look for the ball.

Watkins’ second reception was on a shallow cross from the left. He stopped a little past the right hash marks, and Manuel delivered the ball. Lance Briggs was quick to close on Watkins, and the play ended with just a gain of one yard. An earlier throw may have given Watkins some space to run after the catch, but the Chicago linebackers had it pretty well surrounded. 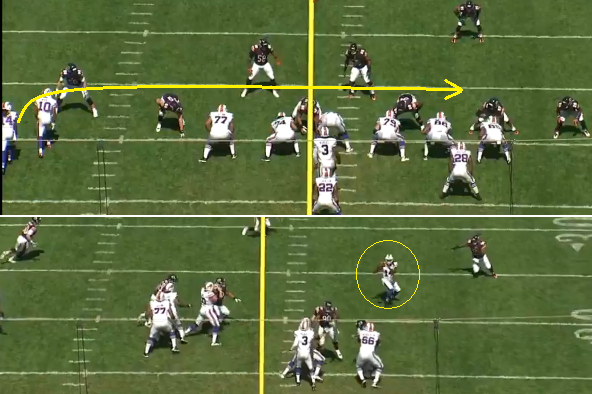 The second target was one of four shallow crosses Watkins ran in the game. He only ran go routes more often (seven times). The breakdown of Watkins' targets is below, with the average route depth determined by his location when Manuel released the ball, was sacked, or started to scramble.

The flat route, which came after a jet sweep fake, was interesting. After receiving the snap from under center, Manuel faked a handoff to Fred Jackson, and C.J. Spiller and Watkins came across the formation from the right. Spiller is in red below, and Watkins is yellow. 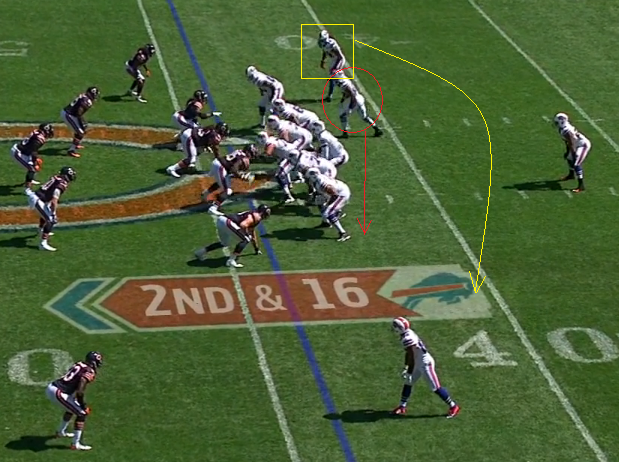 Manuel then fakes the jet sweep to Watkins, while Spiller blocks Jared Allen (69). 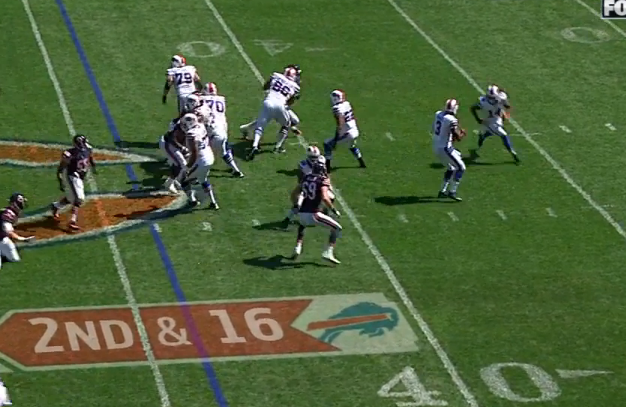 The play eventually led to a screen pass to Jackson for five yards. This is the type of misdirection the Bills can run with so many fast players. The Chicago defense was flowing left, and the Bills needed just one block to spring a big gain. Here's another view of the play.

All in all, it was a decent first game for Watkins. He always lined up on the outside (eight times on the right, and 15 on the left), and was put in a lot of different positions. His routes took him all over the field, but ran 10 yards or deeper 11 times. Here's where Wakins was in Week 1 when Manuel released the ball, was sacked, or started to scramble. 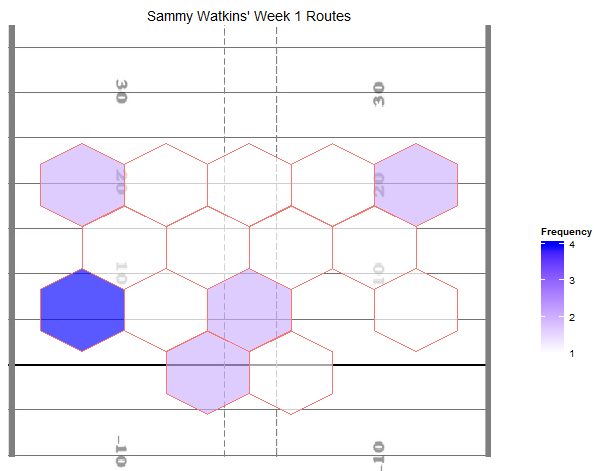 It will be interesting to see how the Bills continue to utilize their explosive rookie receiver. He has the ability to make an impact, even when he doesn’t touch the ball. Hopefully he gets more touches, though. It's more fun that way.