How the Bills schemed open space for Sammy Watkins

Sammy Watkins had a fantastic game against the Dolphins (8 receptions, 117 yards, and a touchdown). Here's how the Buffalo Bills helped him achieve that stat line schematically.

Share All sharing options for: How the Bills schemed open space for Sammy Watkins

"Get the ball to your playmakers" is such a cliche that I can hear Phil Simms droning on and on about it in my head. But there is, of course, some truth to the concept: football teams should want their most dangerous players to have the ball as much as possible, because that gives them the best chance at big plays.

The Buffalo Bills made a concerted effort to get Sammy Watkins the ball on Sunday, and one of the main ways they did that was the shallow cross (or mesh) concept. Buffalo didn't call this play until a 3rd & 3 play in the second quarter of their win over Miami, though they would later call it in the red zone for a touchdown.

Miami comes out in a pressure look that is most likely man coverage with a single safety deep. How can we tell? Look at the deep safeties first: there is only one, and he is in the middle of the field. Next, take a look at the corner on Watkins; he is pressed up on him with an inside shade. It is tough to play any other kind of coverage other than Cover 1 man with the way the defense is lined up. Those vital pieces of information can help EJ Manuel determine the coverage before the play has even begun.

The Bills had a great play call on. Chasing a speedy receiver across the field through traffic in man coverage is not an easy thing to do. 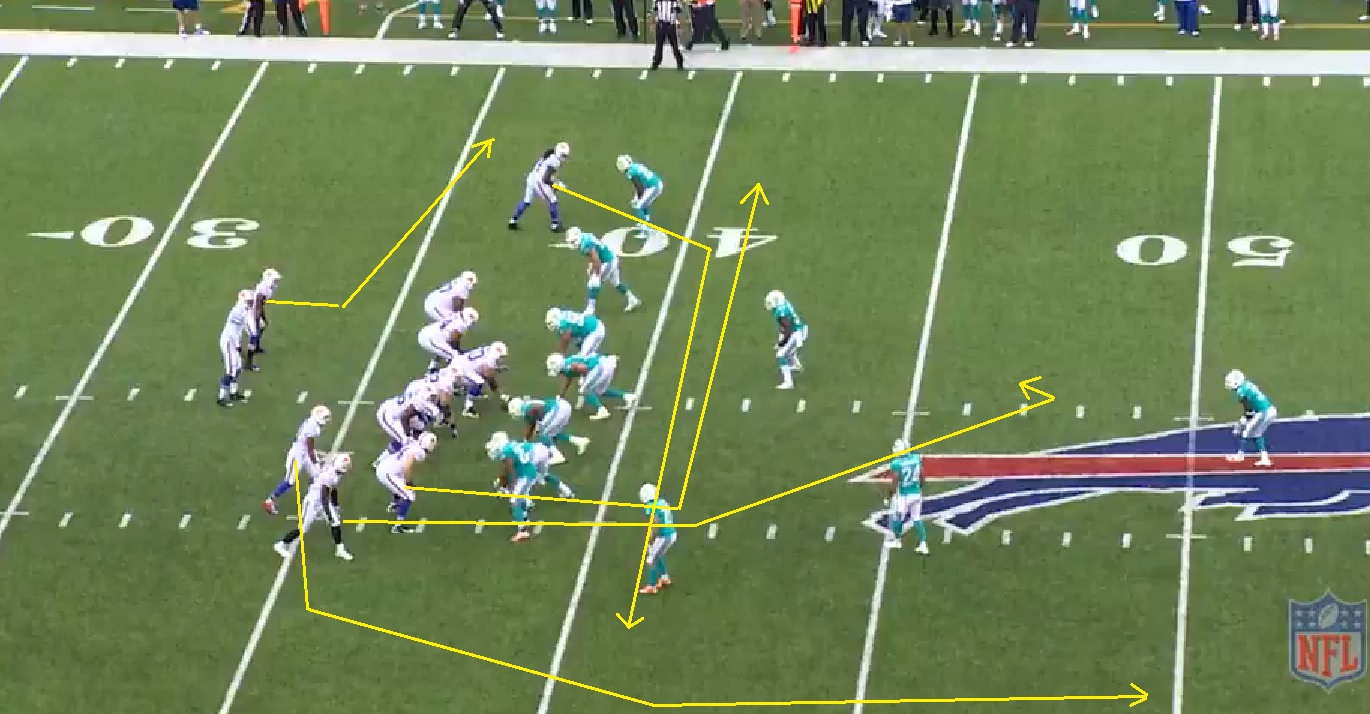 As Manuel throws the ball, you can see the separation that Watkins has. Too much traffic to run through for the defensive back - first his own man (sliding out to cover the running back), then Scott Chandler, who is just "running his route" and gets in his way totally on accident. Since it is man coverage, the defender covering Chandler is also there too. Covering Watkins isn't an easy task as is, but having to maneuver through three other guys, one of which is there accidentally on purpose, really ups the difficulty.

One other thing I wanted to touch on, as well, is the route at the bottom of the field. By running a wheel route, it clears out the space that Watkins is running into. This is getting your playmakers the ball in space: an easy pass into an open area. 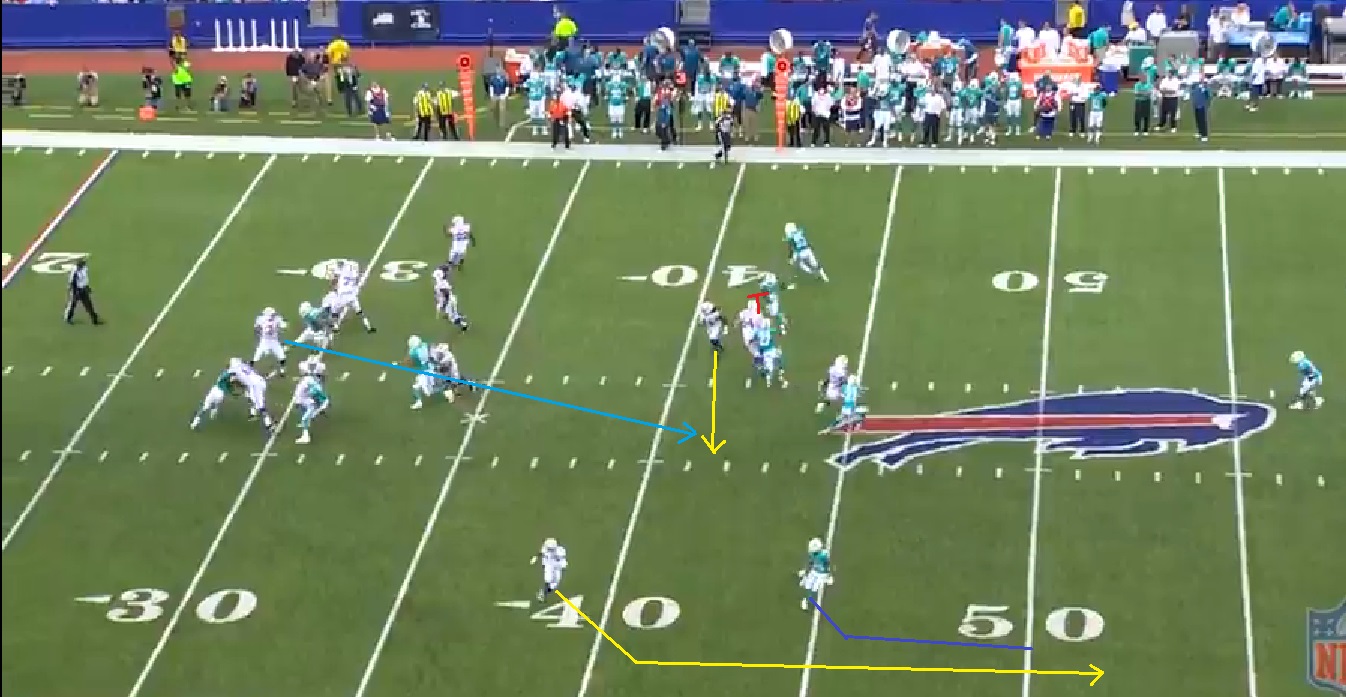 The end zone view shows how easy a throw this was. Watkins already has two steps on his man, and Chandler is still doing his thing. One negative to point out is that Chris Williams was beaten badly by the Miami defender; it's a good thing that this was a quick pass, otherwise it's a sack. 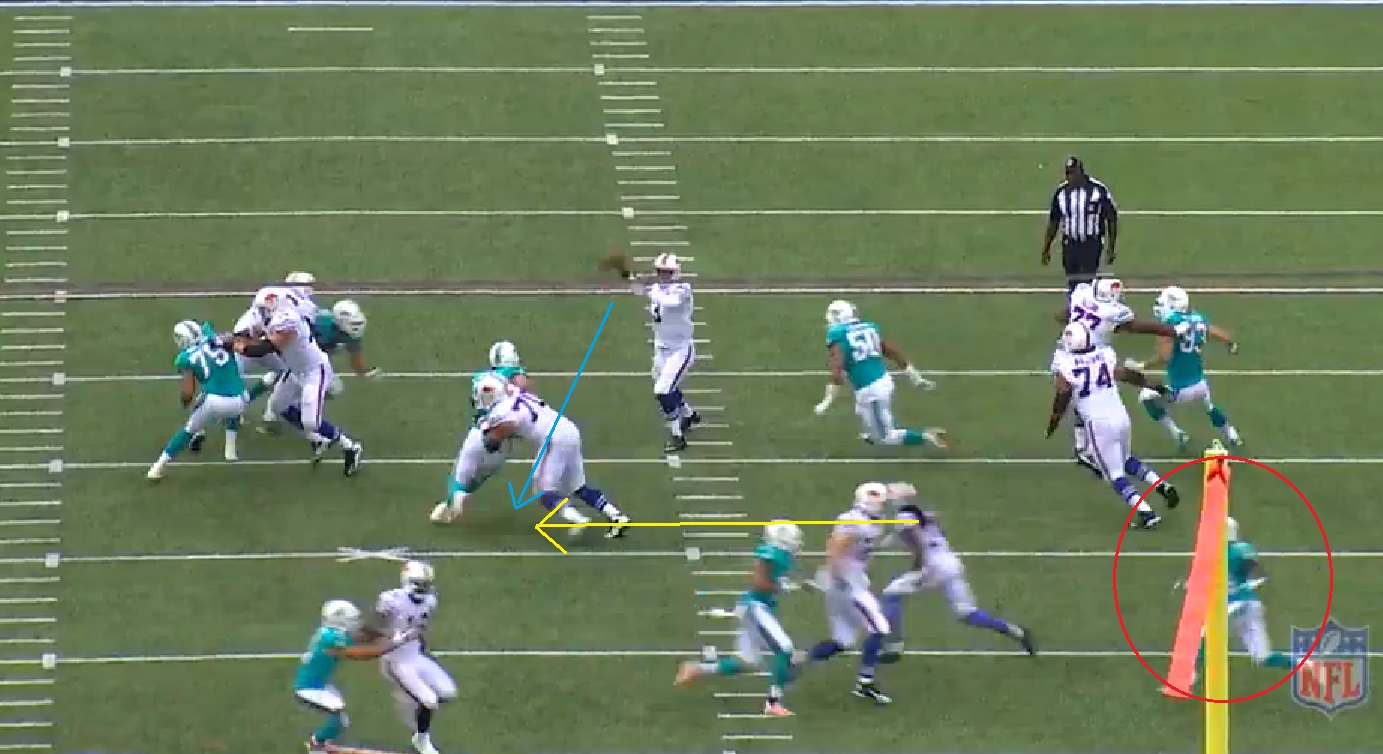 Here is a look at the field just as Watkins catches the ball. Look at the open field Watkins has to run into. Even though it is a short throw, it is imperative that you throw it so the receiver can catch it on the run at full speed. It can be the difference between a four-yard gain and a 24-yard gain (this play went for 17).

There is the passing triangle again, drawn in red. Triangles are everywhere in the passing game because they spread out zone defenders and create passing lanes. Even though this play was against man coverage, if it was run against zone, there would still theoretically be open receivers. 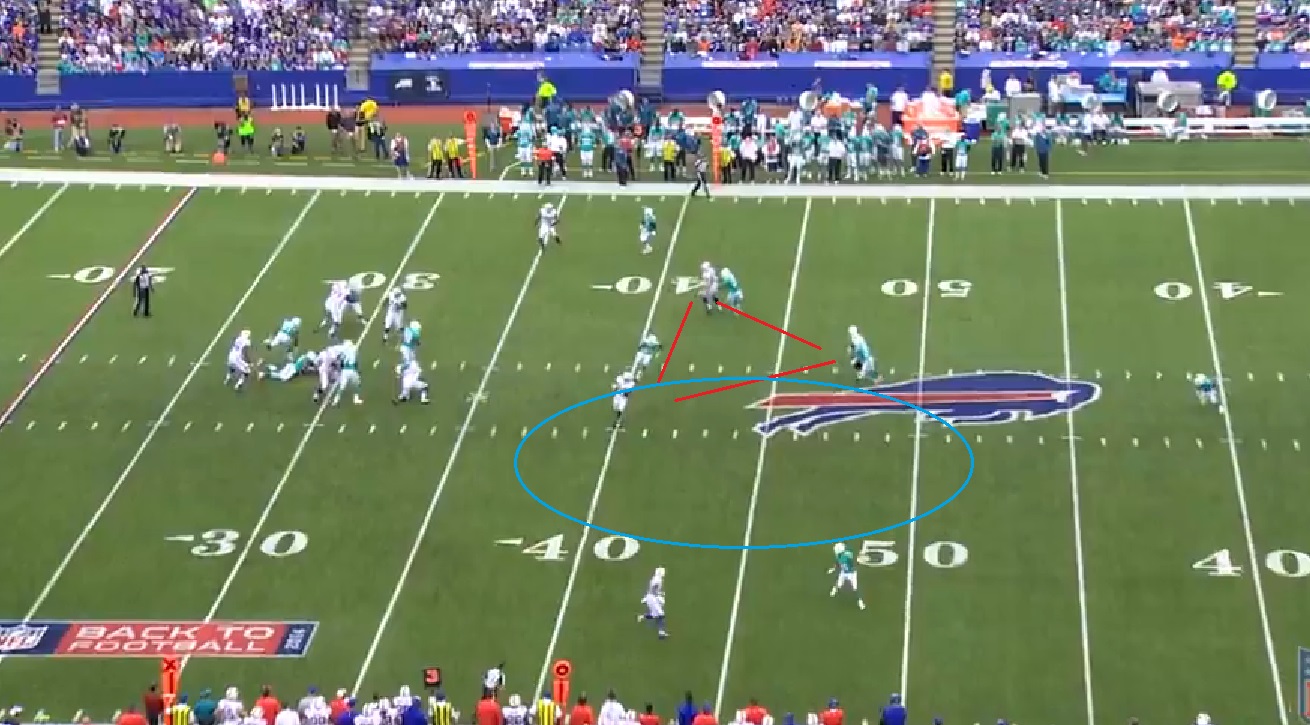 I would expect the Bills to continue to try and get the ball into the hands of Spiller and Watkins using these short, quick, easy passes. It is low risk and hopefully high reward because as we saw on Sunday, they are both capable of big time plays. One final little prediction: the Bills ran a play that looked like this one and had a deep ball (post) very open over the top, as the Dolphins came up hard on the underneath stuff, but Manuel was pressured. I wouldn't be surprised to see that one this Sunday, and hopefully, I get to write about that one next week.