The Buffalo Bills have their work cut out for them on Sunday trying to deal with excellent veteran Chargers tight end Antonio Gates.

As the Buffalo Bills prepare for San Diego this weekend, they must also prepare for Antonio Gates. The veteran tight end caught all seven of his targets last week against Seattle for 96 yards and three touchdowns. Stopping San Diego’s offense all starts with containing Gates.

In 2013 and 2014, Gates has led the team with 22 percent of San Diego’s pass targets. In that time, he ranks second on the San Diego Chargers with 1,053 receiving yards. After charting all of those passes, it’s clear Gates makes his living over the middle. 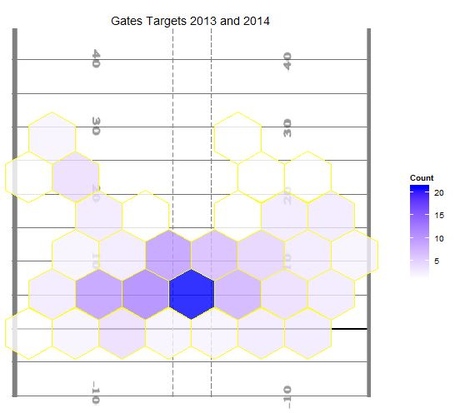 Gates ran curl routes more than any other route. That’s why he was targeted so often in the middle of the field. Those routes are an automatic six- to seven-yard gain for the Chargers.

An incredibly shifty player, Gates utilizes the jab step much like Stevie Johnson was famous for using. But defenders should note, he’s running a curl in the portions of the field below. 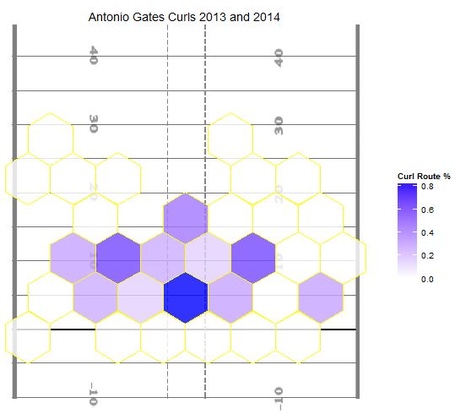 Of course, Gates runs more than just curl routes. All of Gates’ routes from the last season (and the first two this season) are below.

Surprisingly, Gates hasn’t been the Chargers’ preferred target inside the red zone. He ranks third in targets in 2013 and 2014 with 17 targets and 10 receptions, behind Danny Woodhead (25 targets, 22 receptions) and Keenan Allen (23 targets, eight receptions). All of Gates’ targets inside the 30-yard line with binned completion percentages are depicted below. 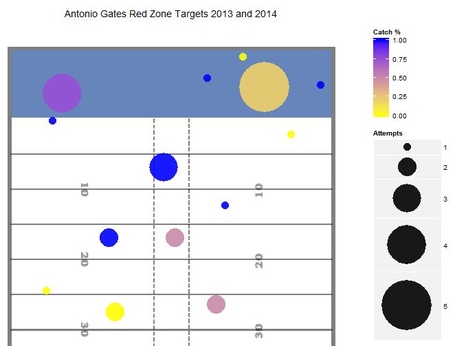 As previously mentioned, Gates is a shifty runner who sets his defenders up to be out of position. His big gain against Arizona on 3rd and 13 was a perfect example. Gates was lined up in the slot, running a corner route. He was one on one with a safety as the receiver lined out wide cleared out on a go route.

As Gates made his break, he showed a fake directly to the sideline (third image below). The safety keyed on that move and closed his angle on the tight end. Gates then turned upfield and the safety was stuck trailing the tight end. Philip Rivers was hit as he threw the pass, but it still netted a 34-yard gain. 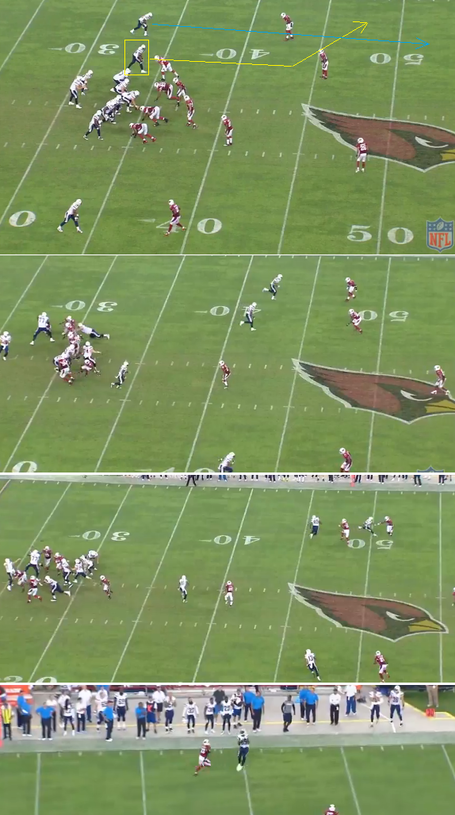 On his first touchdown against Seattle, Gates was once again matched up against a safety. The safety tried to jam Gates at the line, but the tight end was able to elude the jam with a quick sidestep off the line (something he’s very good at doing). Gates then was able to stack the defender behind him and immediately had control over him. An on-target pass resulted in an easy San Diego touchdown.

Gates is going to be a difficult assignment for the Bills. He’s a deceptive route runner with a knack for finding an opening in a defense. The Bills will have to control the middle of the field on defense, where the automatic six yard gains will keep San Diego drives moving the chains.

It will be interesting to see who matches up against Gates today. He’s going to get targets and catches; the key will be limiting those gains.