Bills vs. Texans 2014: short passes (to the left) are the ticket for Buffalo

Short, quick, ball-control passing concepts have worked against the Houston Texans so far in 2014, which is probably music to the ears of the Buffalo Bills and EJ Manuel.

Share All sharing options for: Bills vs. Texans 2014: short passes (to the left) are the ticket for Buffalo

Teams have run play-action passes against Houston 21 times (excluding throw aways, sacks, and scrambles). Those 21 passes have resulted in 17 completions for 112 yards.

EJ Manuel has been great this year on play-action, completing 18 of 22 passes for 180 yards (including two throw aways). He’s throwing those passes short, but they have been effective calls. Manuel’s play-action pass targets are depicted below. 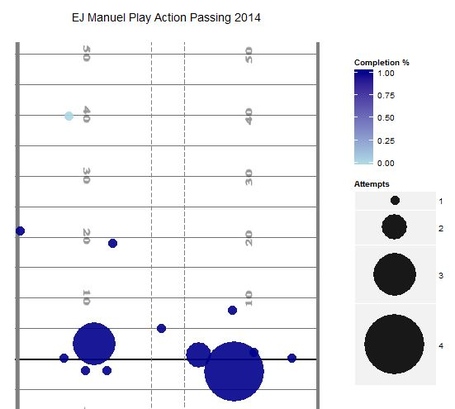 The deepest pass allowed by the Houston defense has been 22 yards downfield. Just two of the 10 passes targeted 20 or more yards past the line of scrimmage have been caught. Another has been intercepted. They don’t allow much deep, but there are opportunities underneath. The targets and completion rates against the Texans are below. 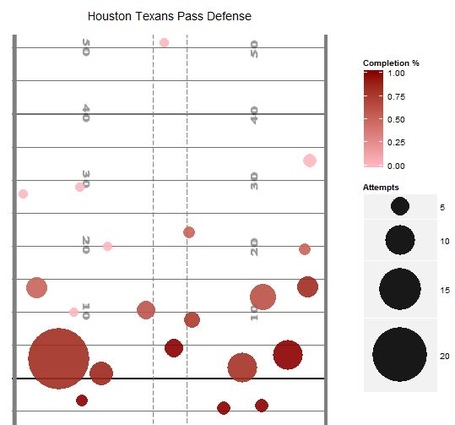 It seems that Buffalo’s short (and quick) passing game has the potential to be effective against Houston. The Texans have allowed an 88 percent completion rate on passes thrown 10 or fewer yards past the line of scrimmage. Meanwhile, 68 percent of Manuel’s passing yards have come on short passes. He’s been good on those short throws - especially to the left, where Houston has conceded a high number of targets and completions. 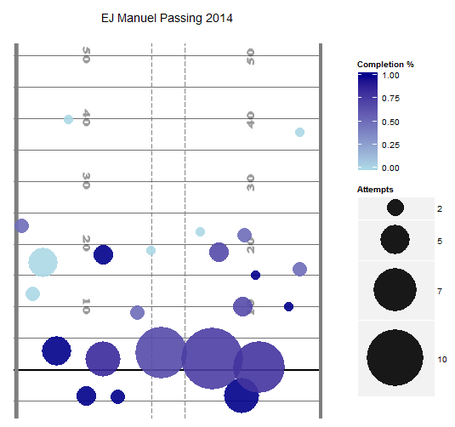 By my count, passes have been thrown under pressure 31 percent of the time against Houston, but opponents have completed 72 percent of their passes and have thrown an average of 9.4 yards downfield. The completions, however, have been thrown an average of just 4.0 yards past the line of scrimmage. They’ve gotten good yardage after the catch, though (4.96 average YAC).

Manuel’s been pressured at a higher rate (44 percent of pass attempts, by my count), and has struggled a bit more under pressure. His passes under pressure have been thrown shorter too, averaging just 5.5 yards past the line of scrimmage. But those passes also have set up great YAC opportunities (10.1 YAC on average). Manuel’s completion rates under pressure are below. 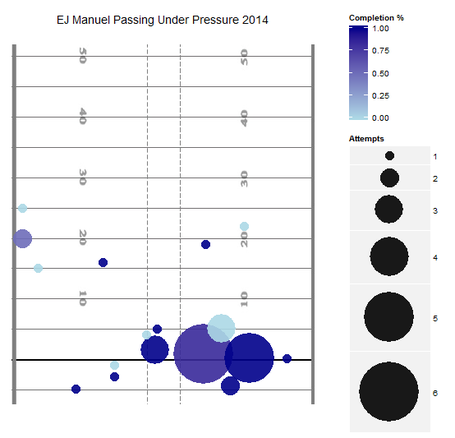 Houston’s defense may allow just the type of passing offense that Manuel and the Bills prefer to flourish. The Bills will be able to set up a lot of short to intermediate passes and allow their playmakers to gain yardage and first downs. Play-action passing will help set that up.

Speaking of play-action passes, the Bills started with three play action passes against San Diego (three completions for 10 yards). Nothing amazing or unbelievable, but they were quick and manageable completions.

For whatever reason, the Bills ran play-action just four more times for the rest of the game last week. Maybe that was part of the game plan, but Manuel is averaging 8.2 yards per pass attempt off of play action. It’s a weapon that the Bills need to utilize.

I’m looking for a lot of short passes from the Bills, hopefully off play-action, on Sunday in Houston. If they’re successful, Houston’s pass rush will be neutralized and the Bills will be able to win the time of possession battle.