Bills vs. Bears 2014: teams separated by timing in passing offense

The Chicago Bears have one of the best passing offenses in the NFL. The Buffalo Bills... do not. A major difference between the two? Simple timing.

Share All sharing options for: Bills vs. Bears 2014: teams separated by timing in passing offense

Fall is the best time of the year. The leaves start to change, the air starts to get crisp, and sports start to take center stage. Boy, am I pumped for football season!

In getting ready for Week 1, I re-watched all of last season's games and also a couple of Chicago Bears games. (Thanks, NFL Game Rewind!) One of the things that really struck me was how good the Bears' offense was in 2013. I know that might seem very obvious, but I was really impressed. All of their passing targets are big, fast, and strong. Brandon Marshall and Alshon Jeffrey are two of the biggest receiving threats in the league (something Mike Williams hopes to bring to the Bills), and their tight end, Martellus Bennett, is 6'6", 265 pounds, and ran under 4.7 in the 40. Talk about bigger, faster, and stronger!

What really struck me about the Bears, though, was how great their timing on offense was. Their routes were well-coordinated, players made their breaks at the correct times, and everything flowed smoothly. The system worked so well, it earned a journeyman (Josh McCown) a new contract and a starting gig of his own.

Here's a look at what I mean. Pre-snap, there are two receivers to each side, close to the formation. The Bills will use this formation as well, along with a bunch look just off the tight end. 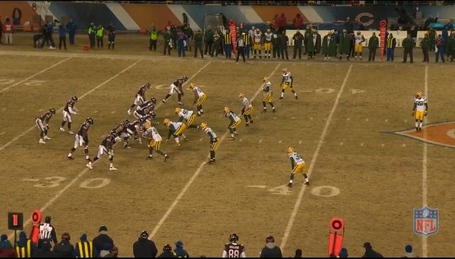 Here is an image after Jay Cutler has thrown the ball. Look at the spacing and depth of the receivers. Everyone is ready to catch the ball, which is already out of the quarterback's hands. Quick read, quick throw, pretty tough to stop. 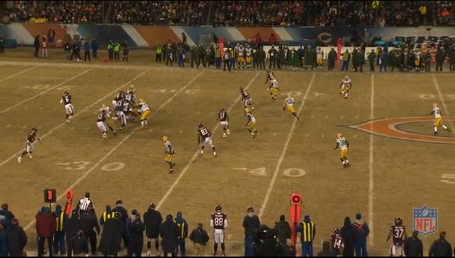 The hallmark of good timing on offense is crisp throws as receivers come out of their breaks. Cutler begins to throw before the receiver makes his break. Everyone is pretty open in this play, but by throwing early and to open space, you can prevent defenders from breaking on the receiver's break.

I picked the above play because the Bills run their all-curls play a lot, and they didn't always have that timing down last season. Here is an example of what happens when you don't have your timing down. The extra half-second holding onto the ball gives the defenders a chance to break on the ball. Note that unlike Cutler's ball above, which is already in the air as his receivers turn and face, E.J. Manuel is still in the midst of making his throw in the same instance. 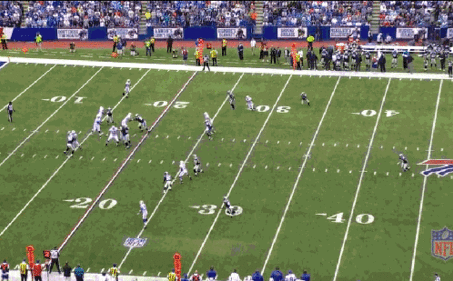 Here is what happens when the Bills do throw in rhythm. Notice how good the spacing of the receivers is, and how Manuel anticipates the throw correctly and hits Robert Woods in stride on a dig over the middle. 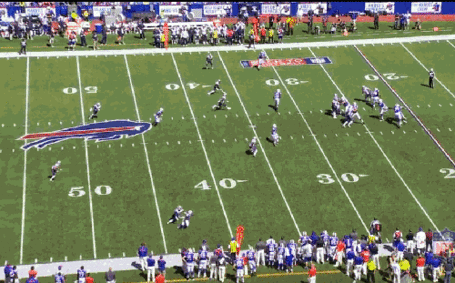 The above is what I hope to see more of this season from Manuel and the Bills. When watching the game on Sunday, take a look at how in sync the two offenses are. Watch how the throws are made as receivers make their breaks. I believe the talent is there; the Bills just need to get that timing down.