The Buffalo Bills have their work cut out for them in Week 1 trying to slow down Jay Cutler, Brandon Marshall, Alshon Jeffery, and the Chicago Bears' dynamic passing offense.

This Sunday, the Buffalo Bills get to face one of the best passing attacks from last season. The 2013 Chicago Bears averaged 7.0 net yards per pass attempt (passing yards minus sack yards divided by passes and sacks), which was good for fifth in the NFL. Jay Cutler missed some time due to injury, but is back as the Bears’ starting quarterback. Let’s dissect his 2013 season.

Cutler’s passes covered the whole width of the field up until about the 20-yard line. The deep passes, however, were limited to three zones: along the two sidelines and between the hashes. The graphic below depicts all of Cutler’s targets from 2013. 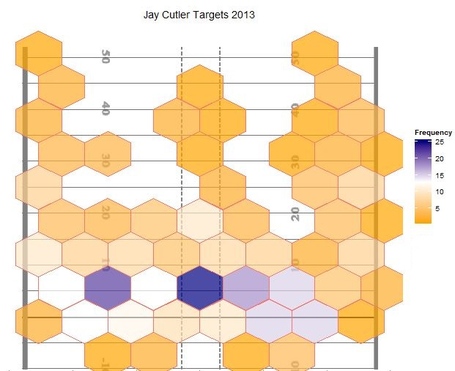 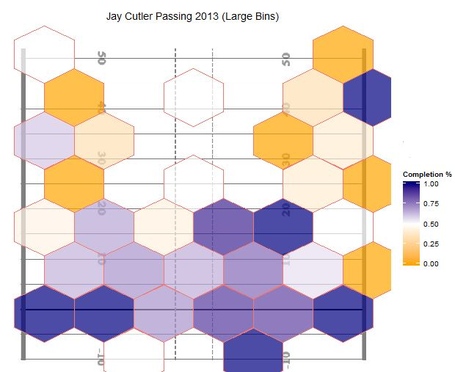 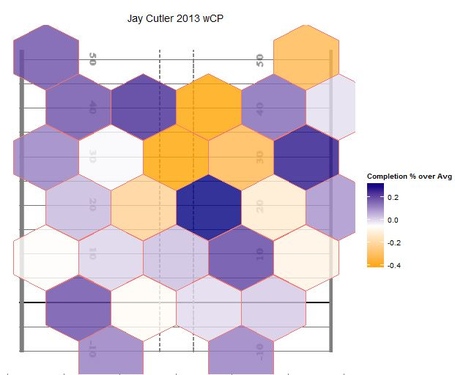 Cutler is actually slightly below average to the deep middle, but is great to the deep left.

Another component of the Chicago offense is their dynamic receivers. Their three main weapons (aside from Matt Forte, their all-purpose running back) are Brandon Marshall, Alshon Jeffery, and Martellus Bennett.

Marshall was targeted 99 times by Cutler (again, ignoring "no play" penalties and tipped/batted down passes) and caught 64 of them for 812 yards. On average, Marshall was about 13 yards past the line of scrimmage when he was targeted. His targets are depicted below. 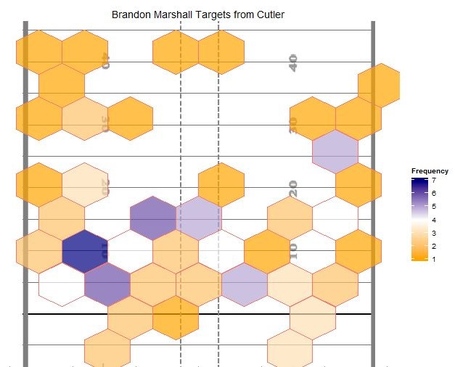 Marshall was targeted 20 or more yards downfield 22 times. He caught 10 of those passes, which turned into three touchdowns. Two of those 22 passes were intercepted, as well. Here are the completion percentages on Marshall’s 99 targets. 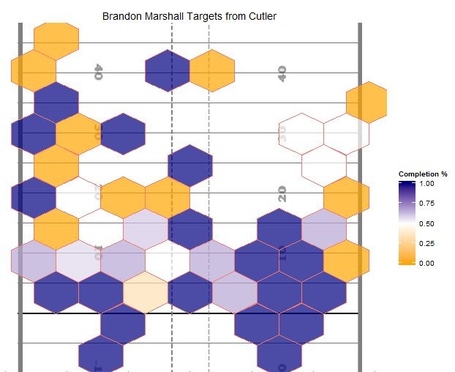 Jeffery is Chicago’s other huge wide receiver. Cutler targeted Jeffery 84 times, which led to 50 receptions for 773 yards. Jeffery was slightly further downfield than Marshall, on average, but had just one more target deeper than 20 yards past the line of scrimmage. To this point, it seems the Bears use Jeffery slightly less often in the short passing game as Marshall. 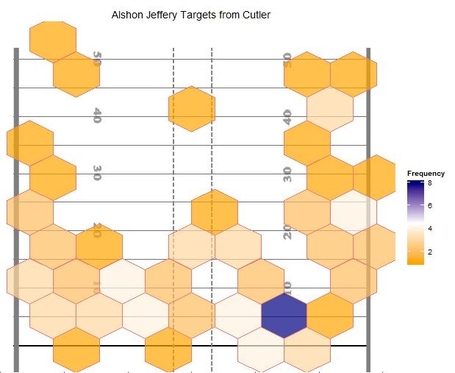 Jeffery had a lower overall catch percentage than Marshall. His deep targets followed that same trend despite a limited sample size (nine catches on 23 targets for one touchdown). Either way, Jeffery is a scary deep threat. Here, he beat double (or triple, depending on how you count it) coverage to haul in a pass almost 40 yards downfield. 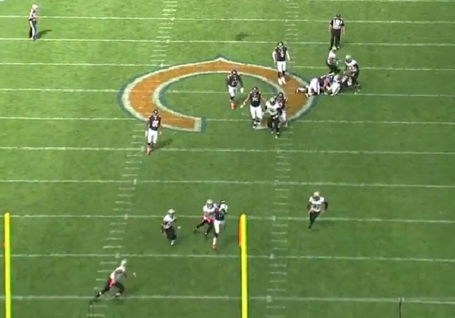 Bennett is a bit of a wild card. He’s a dangerous receiving tight end, but the Bears didn’t target him as deep as the two receivers. On average, Bennett was 7.6 yards past the line of scrimmage when targeted by Cutler. He was almost always in the middle of the field, too. 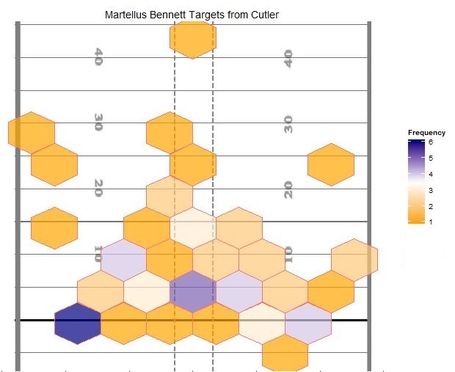 Probably because most of his targets were short and to the middle, Bennett caught a large proportion of his targets (76.7 percent of the 60 passes not thrown away, tipped, or negated due to penalty). When he was deep, however, Bennett caught just two of his six targets. Bennett is a possession receiver in the Bears’ offense. 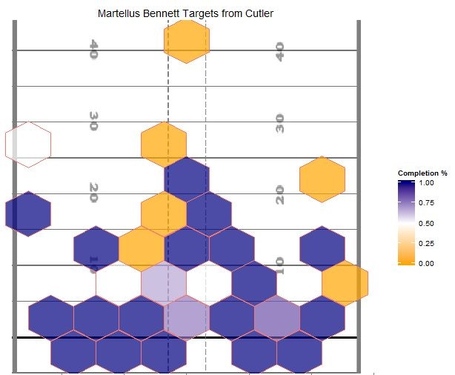 Cutler threw into or within five yards of the end zone 50 times. 23 of those passes were caught, but most of those catches (20) were thrown to the front half or in front of the end zone. Just three of the 13 targets to the back half of the end zone were completed.

The Bears do best when attacking the front half of the end zone. Marshall has the most targets (17), and probably deserved the most, since he caught 59 percent of those targets. Jeffery was surprisingly unproductive in this area. It seems he thrives in space, whereas Marshall’s strength is dealing with traffic. Cutler's targets inside the five-yard line are broken down below.

Chicago ran play-action passes with Cutler about 22 percent of the time. Cutler completed 65 percent of those passes (slightly below the overall completion percentage of 68 percent), but allowed the Bears to target deeper receivers (12.3 yards past the line of scrimmage on average, compared to 9.8 on all passes). It's used rarely enough within the Bears' system to open up the deep throw. Safeties and linebackers, beware.

The Bears’ offense poses a difficult task for the Buffalo defense. The defensive line will have to generate pressure to force Cutler into poor throws (Cutler was a 49 percent passer when under pressure last year). The safeties will have to provide help along the sidelines to prevent big plays downfield, especially on play action passes. If too much attention is paid deep and outside, however, Bennett will be open in the middle.

Finally, once the Bears are in scoring range, look to defend Marshall. He probably won’t be going too deep into the end zone, but it’s likely he will be working along the sidelines.