Now installed as the new owners of the Buffalo Bills, Kim and Terry Pegula afford president Russ Brandon, GM Doug Whaley, head coach Doug Marrone, and members of the New Stadium Working Group time to proceed with their work on their respective projects.

Friday, October 10, 2014 was a historic day in Buffalo sports history. It was the day that Buffalo Sabres owner Terry Pegula and his wife, Kim, were introduced as the second ownership entity in Buffalo Bills franchise history.

Following an emotional press conference, wherein Pegula broke down after spotting Thurman Thomas with tears in his eyes and spoke, genuinely awed, about following in the footsteps of Hall of Fame owner Ralph Wilson, the new owner was asked about what he's learned during his Sabres ownership that can transfer to his new role with the Bills.

"The sports world is a lot more fast paced," Pegula said. "And you guys out in the audience make mistakes a lot more noticeable, and successes a lot better than sometimes we think they are. So it’s a different track. It’s like standing on a treadmill and setting it for four minute miles, and then trying to jump on the treadmill. That’s owning a sports team. Things move fast."

Which is why, through the celebration of the Bills' secure, long-term future in Western New York, the most interesting aspects of Friday's introductory press conference dealt with the next big issues on the docket in the Pegulas' ownership. 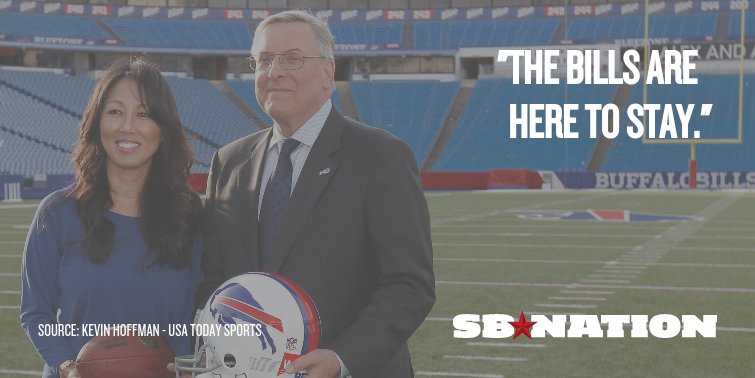 The next Bills stadium

The Bills, Erie County, and New York State have a signed lease for Ralph Wilson Stadium that will cover another eight seasons beyond the one currently being played. The stadium also just underwent $130 million in renovations, and with a New Stadium Working Group part of that lease agreement - they have already been looking into a new stadium for months now, and that work will continue - you can bet that the Bills are ready to start dodging questions about their next stadium again.

Even Pegula noted as much, saying: "I said in the back room, I hope I don’t have to spend the next eight years of my life answering stadium questions."

But before team president Russ Brandon could re-affirm the work of the New Stadium Working Group, and before Pegula eventually deferred a second stadium-related question to Brandon, the new owner shed some interesting light on his potential future plans for a new venue.

"We will gradually proceed to plan and design a stadium for the Buffalo Bills," Pegula said. "You know these things take time. Just ask Joe Battista from Penn State how long it took to build a hockey arena. Twenty years? I’m not predicting that for here but, you know, it takes time to get this stuff organized, and 'Where’s the stadium going to go?' and whatnot. I realize it seems to be a significant issue, but it wasn’t when we bought the team. We wanted to get the team first. You always have to have the prize before you can build the arena."

It's hard not to read that - and harder still if you happened to see or hear it live - and not come away with the impression that the Bills will eventually be playing in a new facility under the Pegulas' ownership. Just don't expect the team to sate our hunger to talk about it over the next several years.

"The fact of the matter is we’ve played two games in a renovated facility and what we have now is, we have time," Brandon told reporters. "We have time to look at the process moving forward and what makes sense for our community as a whole."

Speaking of Brandon, he is no longer the President and CEO of the Bills. He retains his team presidency, with the title of CEO sliding over to Pegula, who did not say much about the current football regime at One Bills Drive - other than to throw his support behind Brandon, and to squash any rhetoric that changes with the regime are forthcoming.

"Well, I wouldn’t automatically assume there’s going to be changes," Pegula said. "You know, we sit here as owning the team a few days, so I haven’t given that any discussion. We like the job Russ is doing with the organization. He’s been here two years now in his present position so we’re learning as we go."

Indeed, it was Brandon, to the surprise of no one, that ended up making the strongest show of support for general manager Doug Whaley and head coach Doug Marrone.

"We’re 21 games into Doug Marrone and Doug Whaley’s career. We’re one draft into Doug Whaley’s career as a Buffalo Bills general manager," Brandon said (via ESPN). "You've heard me say it many times: how you don't win is having seven head coaches, nine offensive coordinators, seven defensive coordinators and six general managers since 1998. We need continuity, and we need to continue to play winning football, and we're pleased with everything that is happening on the field right now."

From a football perspective, then, we should expect the status quo moving forward. Barring something catastrophic happening on the field, it seems far more likely than not that Brandon, Whaley, and Marrone have ample time to continue their work to right the proverbial ship under new ownership.

Pegula did, however, disclose to reporters one notable front office change: in addition to VP Mary Owen leaving the organization to work with The Ralph C. Wilson Foundation, long-time team CFO Jeffrey Littmann will be departing the organization, as well.

The 3-2 Bills, now equipped with more time to try to end their 14-year playoff drought, will compete with the 3-2 New England Patriots tomorrow afternoon for sole possession of first place in the AFC East - and the Pegulas will be introduced to a sellout crowd 20 minutes prior to kickoff.

Buffalo Bills are building a new stadium: all our coverage