The formality has occurred, and Kim and Terry Pegula are now officially the owners of the Buffalo Bills.

Share All sharing options for: Terry Pegula and Kim Pegula are officially owners of the Buffalo Bills

It's official, and it's unanimous: Kim and Terry Pegula have been unanimously approved as the new owners of the Buffalo Bills.

Terry & Kim Pegula are unanimously approved as the new owners of the #BuffaloBills. Congrats to the Wilson & Pegula families.

The news came quickly on Wednesday morning, shortly after the Pegulas were introduced to the rest of the NFL owners at league meetings in New York City.

The Pegulas, as well as Bills president and CEO Russ Brandon, will represent the Bills for the remainder of today's ownership meetings.

Jeff Littmann and Mary Owen have emerged from the meetings. #Bills

Once today's meetings have concluded, the Pegulas are expected to give a statement to reporters on hand. It's also possible that we'll see them at Ralph Wilson Stadium during this Sunday's matchup with the New England Patriots. 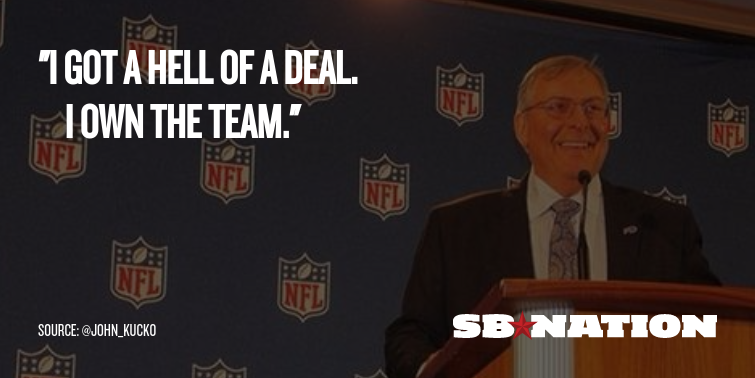 For full coverage of the long and laborious sale process, which reached its official conclusion today, check out our StoryStream on the topic.

Buffalo Bills are building a new stadium: all our coverage

Next Up In NFL