The Buffalo Bills' 2014 home opener against the Miami Dolphins has the potential to become one of the most memorable weekends in Buffalo sports history - but Miami presents a tough challenge despite the pending raucous environment at Ralph Wilson Stadium.

The Buffalo Bills have remained immune to the bad news permeating most of the rest of the NFL this week. While scandals have erupted surrounding star running backs and the league has loosened the screws on its drug suspension policy, the Western New York sports community has been relentlessly upbeat.

Buffalo will, pending league approval, soon be sold to Kim and Terry Pegula, keeping the franchise where it belongs for the foreseeable future. Jim Kelly, the team's biggest icon and a Hall of Fame quarterback, is cancer-free, and will be in attendance in Week 2. A lengthy tribute to late owner Ralph C. Wilson, Jr. is planned for just prior to kickoff, which will have the emotions rolling at at the football facility bearing his name on Sunday morning.

Oh, and the Bills are 1-0 and about to take on one of their historic rivals in the Miami Dolphins. Yes, things are looking up for Bills fans, and the pre-game anticipation for the Bills' home opener is at an all-time high as a result. Miami is also 1-0, and it looks like they have the potential to be a good football team this year, but they have a tough task ahead of them trying to win in what will be an insane environment in Orchard Park.

Keep up with our Week 2 coverage

Last week, we talked about the Bills' need to be much more competitive on the road, and they responded with a 23-20 overtime victory over a high-powered Chicago Bears team at Soldier Field. So far, so good. Next up on the agenda for the Bills: starting off on the right foot in another annual sticking point, competing in the AFC East.

In Doug Marrone's first season on the job, the Bills went 3-3 in six divisional games, which was a stark improvement from the three-year Chan Gailey run in which the Bills were a dismal 4-14 against New England, New York, and Miami. Two of those three wins came against Miami, but interestingly, both of those wins came with the since-departed Thad Lewis under center for Buffalo.

The .500 mark that the Bills were able to pull off in their first season under Marrone was the first time they'd managed to break even in the division since the 2007 season, when the Dick Jauron-led Bills finished 4-2 - sweeping both the Dolphins and the Jets, who held the No. 1 and No. 6 overall picks in the following year's draft, respectively. So far, Marrone is the first Bills coach to hold a .500 record in the AFC East since one Wade Phillips, who was exactly .500 against the division during his three-year stint in the job. It just so happens that Phillips was the last coach to guide the Bills to the playoffs; Marrone's crew will need to at least maintain in the division to have a shot at the postseason, but ideally, of course, they'll improve.

Buffalo's offense - which was horrible throughout the preseason, but which showed signs of not just progress, but of genuinely excellent upside, in that win over the Bears - faces a much stiffer challenge against Miami. Even on their home turf, and even with Miami severely banged up at linebacker.

Miami's defense gave the Bills problems last season, too. The aforementioned Lewis, the erstwhile backup quarterback that started both of Buffalo's wins over the Dolphins, took a pounding in those games, enduring five sacks, two fumbles, and several more big hits. Buffalo's running game managed to break through for 203 yards in the second matchup a year ago, but that was on 51 carries; Miami held them to 90 rushing yards at a meager 3.0 yards per carry during the game in Florida.

That work starts with the Dolphins' criminally underrated defensive line, which flexed its collective muscle in Week 1 by holding New England to just 89 rushing yards and harassing Tom Brady throughout the afternoon, bringing him down four times. Pass rusher Cameron Wake deservedly picks up most of the ink up front - his two sacks last week effectively ended the Patriots' comeback bid - but it is a deep, versatile, and highly talented unit that has given Buffalo fits in the past. Wake, by the way, matches up against rookie right tackle Seantrel Henderson in one of the most obvious mismatches in this contest, so the Bills are going to have to routinely take players out of the route tree to help Henderson.

If the Bills can slow down Wake and the pass rush enough to get by, they should be able to exploit Miami's back seven. Their linebackers, in particular, are an obvious weak point, with the team working around several injuries at the position, most notably a season-ender to top linebacker Dannell Ellerbe. Buffalo had a strong afternoon in Chicago exploiting the underneath zone coverages in Chicago's secondary, and the opportunity will exist to do the same against Miami - again, if they can keep EJ Manuel clean in the pocket.

It is, however, the Bills' running game that will make or break the team's fortunes offensively. Their 193-yard effort against the Bears was a strong opening statement, but Chicago had an awful run defense in 2013, and may be on their way to a similar result this season. Miami is much better. If the Bills can't establish a competent foundation for their offense behind C.J. Spiller and Fred Jackson on the ground, the way they did at Soldier Field, then the game will quickly flip into an advantageous situation for Miami against a very young Bills passing attack. 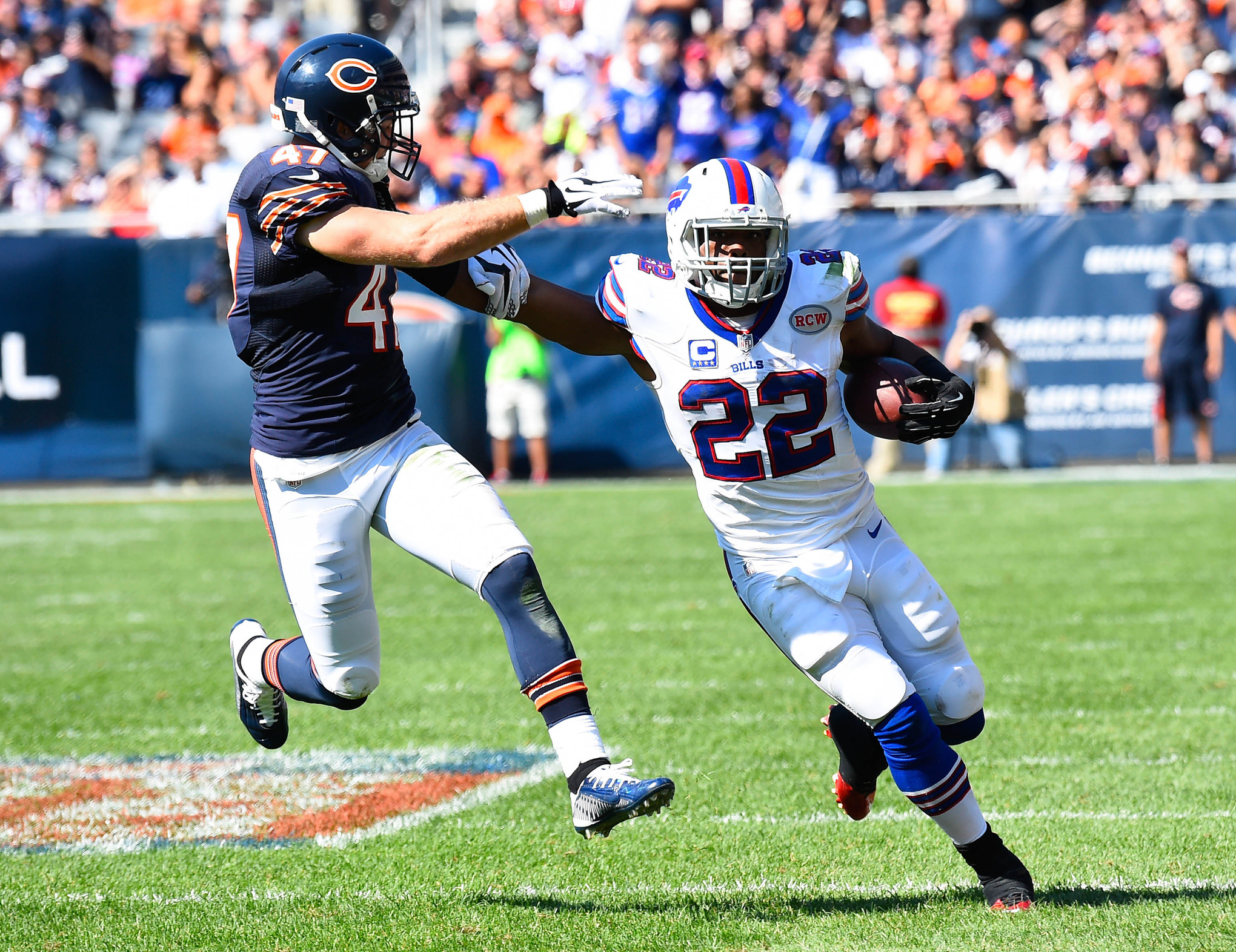 Ryan Tannehill has not had the easiest go of it against the Bills through his first two NFL seasons. Miami is just 1-3 against the Bills in that time frame, with Tannehill completing a paltry 47.9 percent of his passes (56-of-117) at a paltry 4.7 yards per attempt (547 yards) with six touchdowns and four interceptions. He has also been sacked 14 times in those contests. His last outing, a Week 16 shutout loss in Orchard Park last season, was particularly brutal: he was sacked seven times, and completed 10-of-27 passes for just 82 yards in the 19-0 Bills win.

So far in the 2014 season, however, the foundation around Tannehill is looking much-improved - particularly along the offensive line and in the running game. Tannehill has never had a running game to speak of in Miami, and his offensive lines in 2012 and 2013 were genuinely awful, but in Miami's 33-20 win over New England last week, both of those areas performed extremely well in the upset win. The pass protection in front of Tannehill, in particular, was much-improved. When New England rushed four, we saw an awful lot of this: 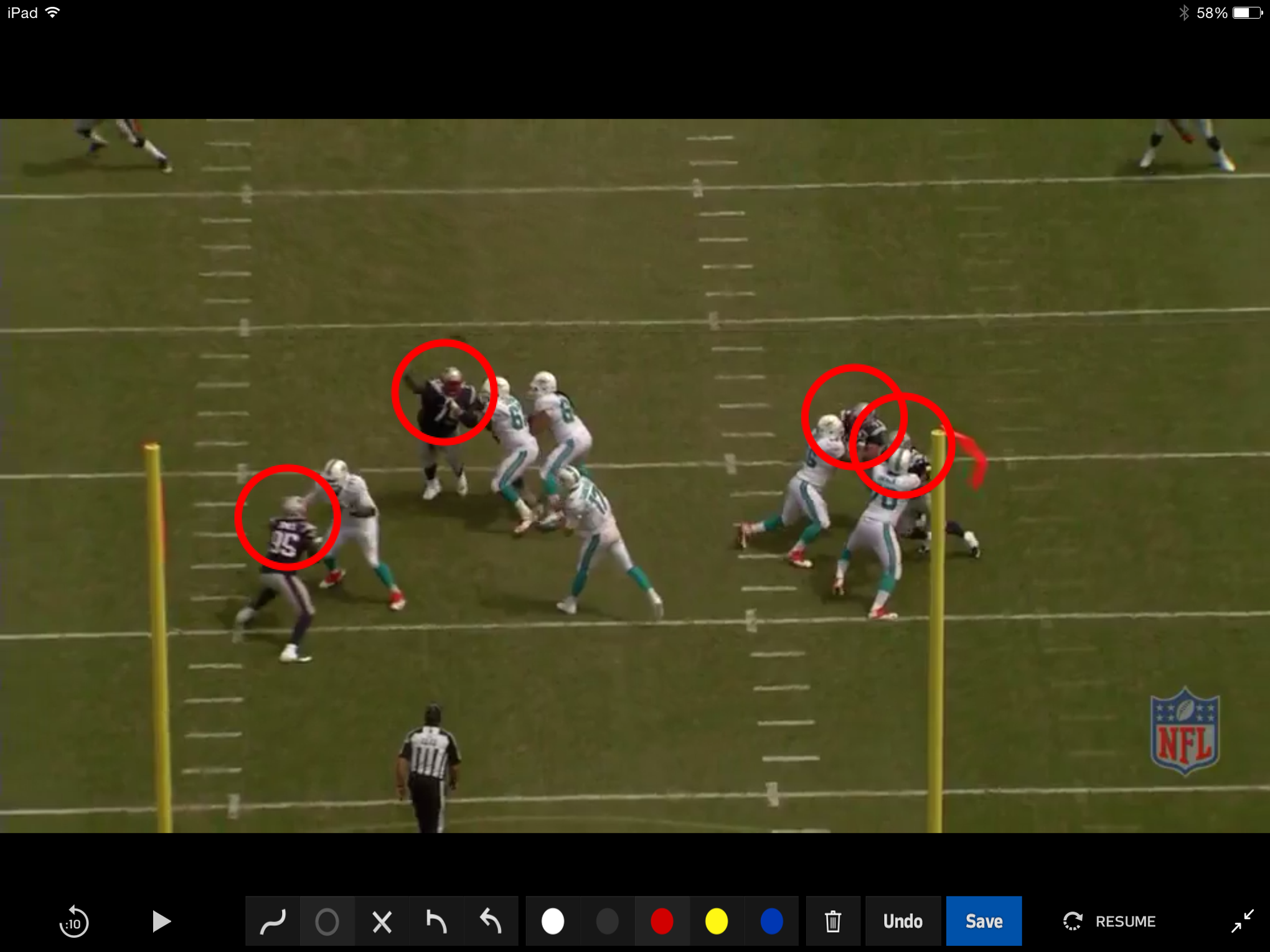 Buffalo is coming off of a slow start defensively in Week 1, where three forced turnovers helped to make up for an otherwise difficult day in which Chicago rolled up 435 yards of total offense, most of it through the air. The Bills will need to tighten up against the pass - Leodis McKelvin (10 receptions and 135 yards allowed, according to Pro Football Focus) and the team's linebackers in particular - but it is, as always, the run defense that is the bigger concern. Miami ran for 191 yards at over five yards per carry against New England, with free agent addition Knowshon Moreno (24 carries, 134 yards and a score) doing most of the damage. Buffalo, meanwhile, allowed 4.8 yards per carry in Chicago, and can't afford to let Miami be two-dimensional on offense.

That brings the game, as it will in every contest this season, down to the front seven. Buffalo's highly talented defensive line was not especially disruptive against Jay Cutler last week, and there were too many big runs allowed, as well. The return of Nigel Bradham at linebacker will help against the run, but it'll be up to Buffalo's defensive line to dominate Miami's re-tooled offensive line the way they did twice in 2013.

Chris Gragg: Slowing down Wake is of the utmost importance for the Bills if they're going to remain adequately balanced offensively, and expecting Henderson to handle that task himself would probably be rather unwise. The team's best blocking tight end, Lee Smith, is doubtful with a toe injury. The Bills will run a series of chip blockers Wake's way, to be certain, but a big blocking performance is needed from Smith's replacement as the second tight end, Gragg - as well as from starter Scott Chandler, a notoriously iffy blocker.

Nickell Robey: Buffalo's second-year slot corner had two of the best games of his rookie season against Miami a year ago. In the early-season road game, Robey recorded a pick-six to give the Bills an early 7-0 lead in an eventual 23-21 win, and recorded three defended passes in that contest, as well. In the Week 16 shutout win, Robey was again dominant, recording two sacks and another handful of bone-jarring hits. It would be great if he could make it three-for-three in a big division game.

Charles Clay: Buffalo's linebacker situation could spell good things for Clay, who has been as inconsistent as his team's passing attack in five career games against the Bills, but has really hurt the team at times. He's averaged 13.4 yards per reception in his career against Buffalo with two touchdowns. Bradham's return to the lineup will help the Bills cover up Clay, but he has sort of a poor-man's Kevin Faulk vibe when he plays against the Bills: he seems to always make one or two clutch plays. 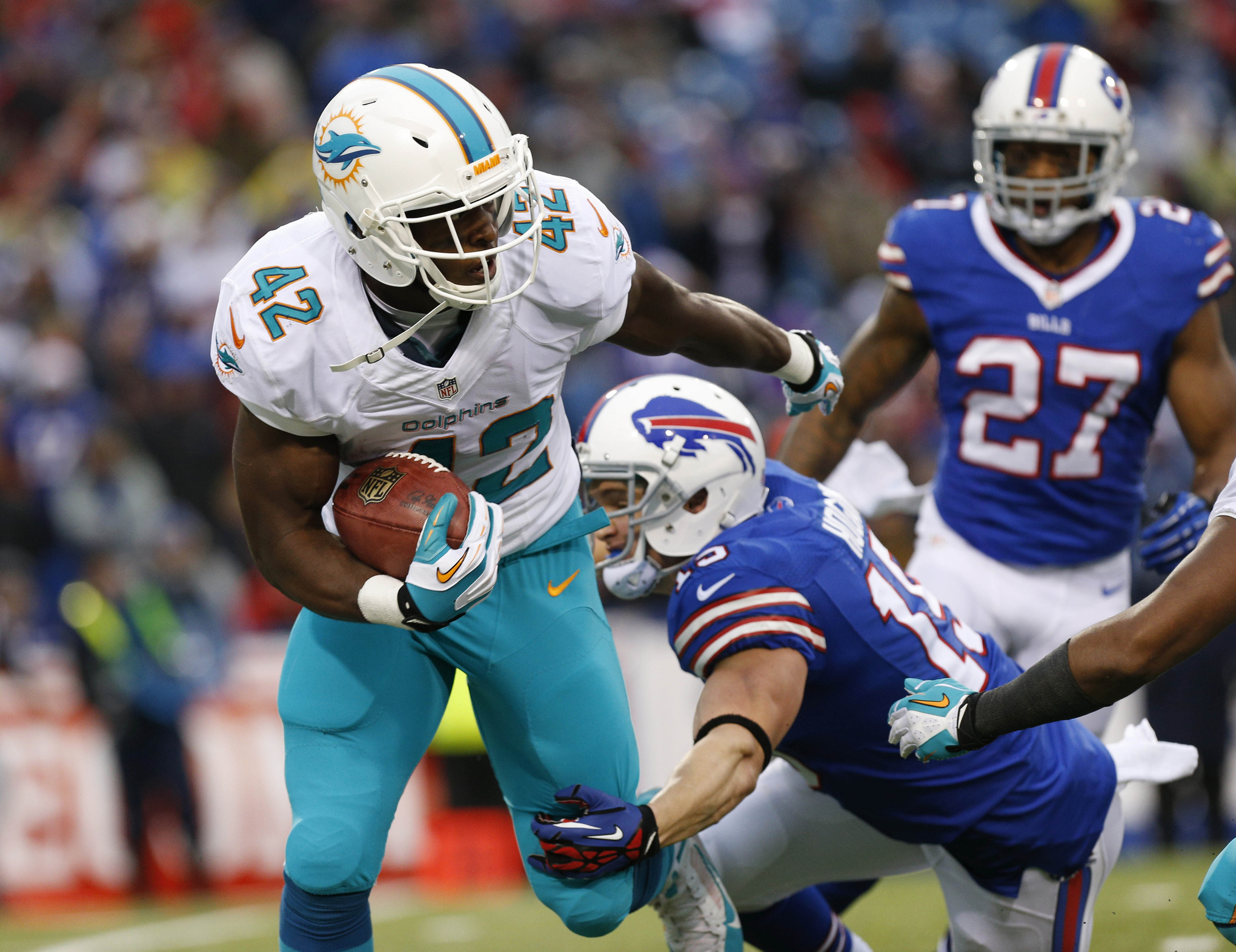 Olivier Vernon: Wake gets the press, deservedly, when it comes to Miami's pass rush, but Vernon is nearly as dangerous on the other side of the field. He recorded 11.5 sacks a year ago, in his second pro season, and started 2014 off with a sack of Brady in the win over New England. Vernon will spend most of his day matched up against Cordy Glenn, which alleviates some of the concern given Glenn's typically stellar play (and the problems Wake presents on the other side of the line), but Vernon is the type to strike just when you've forgotten about him - and Glenn wasn't perfect in Chicago.

On a neutral field, there's a lot more to like for Miami in this matchup. Their defense has looked better than Buffalo's through one game this season, and the offenses are structured very similarly. These are teams built in nearly identical images, and both are talented enough to contend for a wild card spot in the AFC.

But this game is not taking place on a neutral field. In fact, this might be the closest to the exact opposite of the neutral-field concept that we've seen in Buffalo since the team's Super Bowl heyday. The play on the field matters more than anything, but that doesn't mean it's easy to walk into a scene like the one that will be on display in Orchard Park as a hated rival and come away with a win. In a matchup between two young offenses trying to overcome the same strengths (defensive line) and exploit the same weaknesses (linebacker), we'll take the home team. Bills 26, Dolphins 20