Fresh off of a surprising win over the Baltimore Ravens, the Buffalo Bills are seeking not just the end of a five-game road losing streak, but a 3-2 record with a win over the Cleveland Browns on Thursday Night Football. The Browns, meanwhile, are looking to win their third straight game since the Trent Richardson trade and the insertion of Brian Hoyer into the starting lineup. This is our preview of the nationally televised matchup.

When the Buffalo Bills and the Cleveland Browns are through playing football tonight, one of the teams will be 3-2 and in the midst of a multiple-game winning streak. That's a forecast not many could have foreseen - not just before the regular season started, but also within the past two weeks.

Analysts wrote the Browns off the day they traded second-year running back Trent Richardson to Indianapolis for a first-round pick and made Brian Hoyer their starting quarterback. They have since won two straight games - one over a playoff-caliber division rival in Cincinnati - and are tied for first in the AFC North, sporting the NFL's third-ranked defense and one of the most athletic pass-catching duos in the league.

Buffalo, meanwhile, has been on a roller coaster ride over their last three games. A last-minute win over Carolina in Week 2 was followed up by a dud performance in New York, which was then followed up by a surprising win over the defending Super Bowl champion Baltimore Ravens last Sunday. No one is quite sure yet what to make of this Bills team, but they'll have an opportunity to make another statement this evening with a big road win.

Keep up with all of our Week 5 coverage

Believe it or not, the Bills are in the midst of their third road losing streak of five games or more within the last three-plus seasons. The Bills ended a five-game away skid with a Week 11 win over Cincinnati in 2010, then promptly lost another eight straight on the road before a Week 3 win over the Browns last September.

Ideally, the Bills will end their current five-game road losing streak the way they did those other two: in the state of Ohio. Buffalo last won a road game in Arizona last season, when it took a Jairus Byrd interception in overtime to set up a game-winning field goal. Since then, the Bills have lost road games in Houston, New England, Indianapolis, Miami and New York.

They'll have to try to end the streak on national television, which has not been kind to the Bills, either. As our own Matt Warren points out, up until a 19-14 win over Miami on Thursday Night Football last November, the Bills had lost 10 straight prime time matchups dating back to 2001. Buffalo's charge, then, will be to prevent one streak from ending and another from beginning anew.

Make no mistake about it: the Bills are a run-first offense under Doug Marrone and Nathaniel Hackett, even as they push the tempo and dial up plenty of shots downfield. The Bills enter Week 5 ranked second in the NFL averaging 152 rushing yards per game, and their average of 37 rushing attempts per game is a league high. Many teams run the ball more efficiently, but none have worked harder than the Bills to establish the run.

In the latest episode of the Buffalo Rumblings Podcast, we recap the Bills' surprising win over the Ravens and preview the Browns game. Give it a download, and let us know what you think of the show!

The Browns, meanwhile, sport the NFL's fourth-best run defense at the moment, allowing an average of 79 rushing yards per game to opponents - and that's after playing Minnesota's Adrian Peterson in Week 3. Buffalo won't be deterred by that ranking - Baltimore came in ranked No. 4 last week in the category, and were giving up less than 75 yards per game - and the Bills promptly rushed for 203 yards in their win.

Then again, the team's two running backs, C.J. Spiller and Fred Jackson, were much healthier at the start of that game than they will be this evening. Spiller, nursing a sprained ankle, did not practice at all this week and is listed as questionable on the injury report. There's a chance that he won't play, though reports that he plans to suit up have been out since Monday. Fred Jackson will play tonight, but will also likely wear a knee brace as he plays through a sprained MCL. With Spiller and Jackson dinged, Tashard Choice is expected to see a bigger workload tonight - and practice squad back Ronnie Wingo made the trip with the team just in case they need to make a last-minute call-up.

The Bills use the run to set up the pass for rookie quarterback EJ Manuel, who may very well be facing the stiffest challenge of his short career operating a passing attack trying to produce against cornerback Joe Haden and an aggressive pass rush. Haden has shut down anyone that's crossed his path this season, and will see plenty of Stevie Johnson - with a dash of Robert Woods, perhaps - this evening. It'll be another hurdle for Manuel, who had his worst performance by far on the road in New York two weeks ago, and that'll be doubly true if the Bills can't establish their running game the way they did against Baltimore. 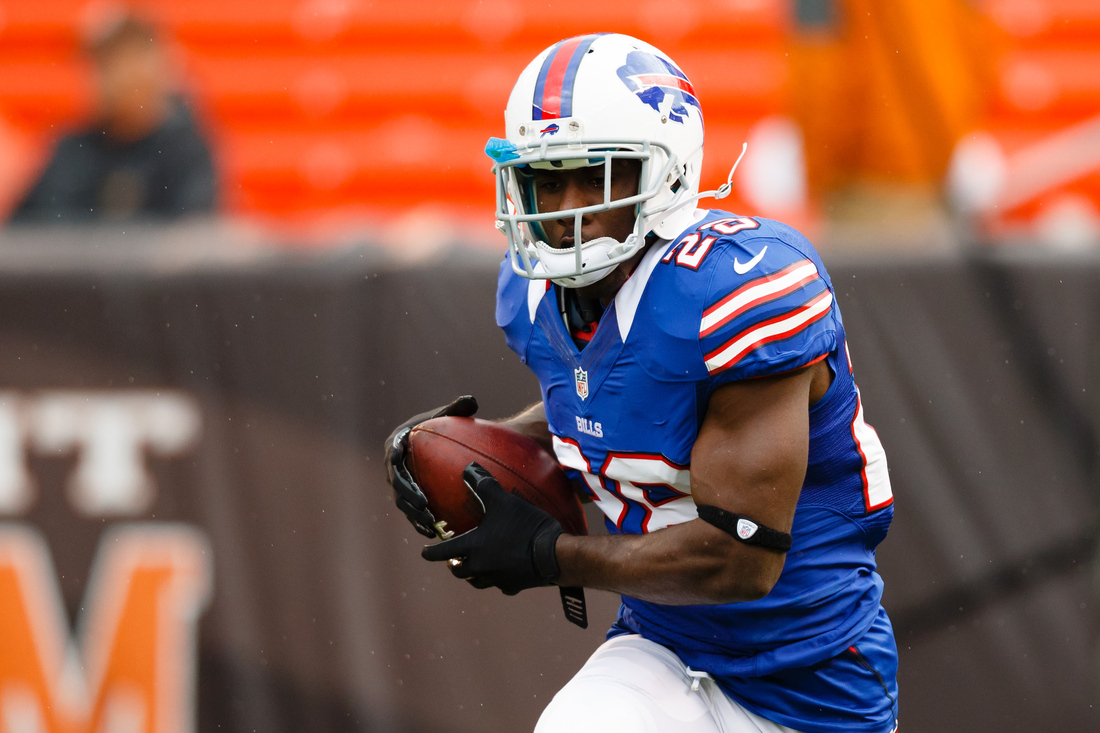 In their back-to-back wins, Cleveland's offense has been comprised mostly of the aforementioned Hoyer, who replaced Brandon Weeden in the starting lineup, force-feeding the highly talented pass-catching duo of receiver Josh Gordon and tight end Jordan Cameron. The Browns scored six touchdowns in those games; five of them went to Cameron and Gordon. Cleveland gained 745 yards of total offense in those games; 396 of those (53.2 percent) came via runs and throws to Gordon and Cameron. They have been targeted 50 times by Hoyer, reeling in 30 of those throws for receptions.

Buffalo recorded five interceptions in last week's win over Baltimore, but due to a rash of injuries in the secondary, they've also been springing leaks for several weeks. Torrey Smith racked up 166 yards and a touchdown in Week 4, with Justin Rogers yielding not just that score, but a second to Marlon Brown. A week prior, he was primarily responsible for allowing New York to produce two different 100-yard receivers, giving up another two scores in the process. Interceptions aside, Buffalo's pass defense continues to have problems, and that doesn't bode well with Gordon and Cameron on the other side of the field.

Rogers will remain in the starting lineup with Stephon Gilmore sidelined, and if Leodis McKelvin - battling a hamstring ailment - doesn't suit up (he's questionable), safety Aaron Williams will start at cornerback for a second straight week. If that happens, Da'Norris Searcy - who would draw Cameron in coverage often - and Jim Leonhard will start at safety.

In the running game, the Bills allowed only 24 rushing yards to Baltimore on nine carries last week, yet still rank near the bottom of the league in the category. They'll work to keep the Browns pass-happy by containing a committee of Browns runners led by none other than Willis McGahee, who has rushed for 55 yards on 23 carries in his two games with Cleveland since the Richardson trade.

Against Baltimore, the Bills used the running game to set up three distinct shots down the field, and all had a chance to be big (read: scoring) plays for Buffalo. Manuel was only able to hit on one of them, as pressure forced bad throws on the other two. Flip through the gallery above for a closer look, and hover your mouse over the photos for descriptions of what you're seeing.

Hackett likes to set up plays throughout a game, and used the above end-around look to set up a gorgeous play-fake release to tight end Lee Smith that, had Smith not tripped en route to the end zone, likely would have yielded six points. Take note that the Bills ran these end-around plays from the same formation as they used on the deep throws in the first gallery - and on 3rd & 1 situations, as well.

WR/PR Travis Benjamin. As a rookie last season, Benjamin gave the Bills some problems with two receptions for 44 yards and a touchdown despite Buffalo's win. He's an afterthought as the fourth receiver in Cleveland's offense, but his speed was an issue last season, and the precedent is there for Benjamin to surprise. The real reason we're putting him here, however, is because of that speed in practice as a punt returner. Bills punter Shawn Powell continues to struggle with consistency, and while they've thus far dodged the bullet on giving up a lengthy return or two to talented returners, Benjamin may have the opportunity to end that lucky streak tonight.

RB Chris Ogbonnaya. There is a Fred Jackson quality to Ogbonnaya, particularly in the way that Browns offensive coordinator Norv Turner utilizes him. Ogbonnaya is a nice complementary runner, a rock solid receiver and a good blocker. He'll line up at fullback and tailback, and is something of a wild card to keep track of. Ogbonnaya has the Browns' only touchdown in the last two weeks that didn't go to Gordon or Cameron, and if the Bills lose track of this guy, he has the look of a player that could make life difficult for the Bills by sustaining drives on third down - which is, of course, something that the Bills have struggled with on both sides of the ball all season. 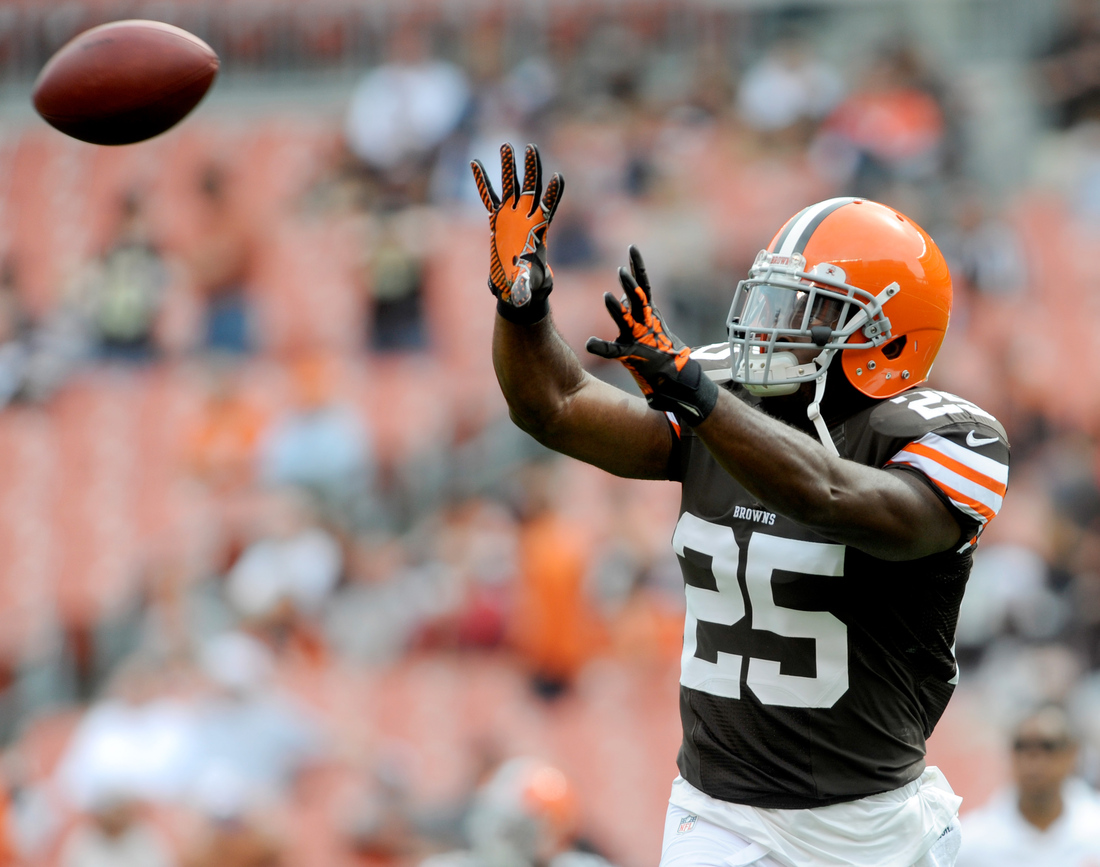 WR/ST Marcus Easley. The biggest reason that the Bills have been able to get away with Powell's punting inconsistencies has been the play of Easley as a gunner. The fourth-year receiver out of Connecticut doesn't see much time on offense, but has nonetheless quickly made a name for himself this season as the Bills' best special teams player. He had four special teams tackles in the Baltimore game alone, and has eight on the season. Watch this guy cover kicks and punts; you won't regret it.

DL Alan Branch. Now a full-time starter in Mike Pettine's system thanks to the season-ending injury Alex Carrington suffered in Week 3, Branch is coming off of an excellent starting debut against Baltimore and bears watching. The 6'6", 325-pound veteran was stout against the run and had a couple of nice pressures in Week 4, and may be lined up against backup Browns guard Oniel Cousins tonight if starter Shawn Lauvao (questionable for the game) can't make it onto the field. Branch has an important role to play in Buffalo's run defense, and will look to sustain his current momentum tonight.

Buffalo has an excellent opportunity tonight to make a statement against a good football team - a good defense, in particular - on national television. Still, we consider this an uphill climb for the Bills for three reasons: their struggles on the road, exacerbated by a rookie quarterback; the matchup of offensive skill players favors the Browns thanks to Buffalo's battered secondary; and, unless the Bills can replicate their fast start against Baltimore, a rowdy prime time crowd will be a factor throughout. If the Bills consider themselves serious playoff contenders - and there's no reason they shouldn't now, even after an 0-2 start in the division - this is a game they have to win. Browns 20, Bills 16