C.J. Spiller had an ineffective day running the football against the New England Patriots (17 carries, 41 yards) - and we wanted to find out why. The answer isn't simple, but the issues are certainly fixable.

Each Wednesday morning at Buffalo Rumblings during the 2013 Buffalo Bills season, we'll be using the All-22 coaches' tape provided via the NFL Game Rewind service (seriously, buy it) to take a closer look at one prevailing theme from the previous weekend's game. The ineffectiveness of star running back C.J. Spiller (17 carries, 41 yards) in Sunday's 23-21 loss to the New England Patriots is our subject from Week 1. Let's dive right in, shall we?

This was a simple case of left guard Colin Brown not blocking well. In the first still below, you can see that Brown's assignment has closed off the cutback lane by getting outside of Brown's left shoulder; Spiller has therefore decided to try his hand off of Brown's right shoulder for a short gain, where there's a small crease but an unblocked defender waiting at the second level. 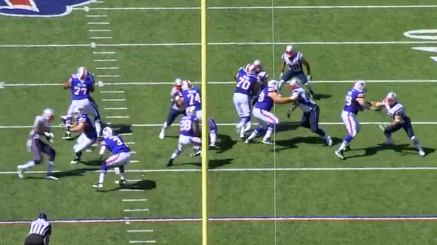 You see below how Spiller's plans were quickly foiled by the same Patriot that Brown was blocking. He sheds Brown's block with ease, moves across his face and brings down Spiller for a short gain.

Here was one of the few successful runs of the day, and it's pretty straightforward: Eric Wood effectively seals Vince Wilfork, Erik Pears makes a nice cut block on the backside, Kraig Urbik gets a hat on a hat at the second level, and there's a gaping hole. Spiller pressed this hole to the left for a solid gain, but couldn't make the safety or the crashing corner miss. 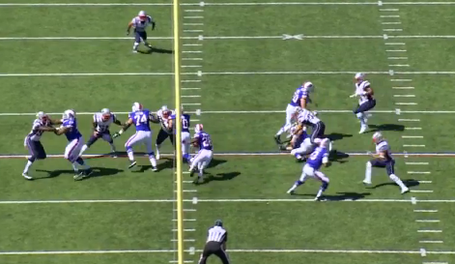 This was a blocking breakdown on the part of right guard Urbik. Below, you see the moment at which he disengages from a defensive lineman to head to the second level to block Jerod Mayo... at the same time that Pears is doing precisely the same thing.

Urbik's primary assignment swims past him and meets Spiller at the line.

On this play, if you look closely at the still below, you can see Spiller cutting to his right (your left) behind the blocker assigned to Vince Wilfork (who was a monster in this contest). Ahead of Spiller, on the hash at the 10-yard line, you can see Urbik moving to the second level.

As Spiller cuts into the open field, Urbik hasn't moved an inch, when he should be further upfield putting a hat on a hat and giving Spiller one less second-level defender to dodge. Instead, Spiller essentially runs into Urbik, and the play is dead in the water.

This was one of the few plays in which things went right for Spiller from a vision standpoint and the blocking in front of him. It's hat on hat, there's a massive lane to the right, and Spiller saw it and exploited it. It was an eight-yard gain after Spiller made a defensive back miss before heading out of bounds. 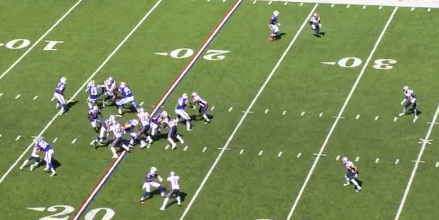 This one's on Spiller. As you can see below, there's a massive lane right up the middle of the field, with only safety Steve Gregory in good position to make a stop - and he's 10 yards downfield. (Mayo may have gotten himself into the play, but he's still engaged with Cordy Glenn below, and we all know how quickly Spiller can accelerate.) 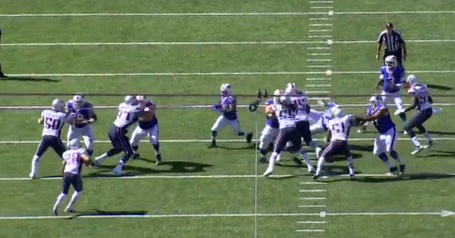 For whatever reason, Spiller bounced this run outside, allowing contain defender Rob Ninkovich to easily shed his block and stop Spiller. This was the most frustrating Spiller run to re-watch from Sunday's loss.

This is another play in which things appear to be going very well off the snap. Cordy Glenn and Brown have efficiently double-teamed Wilfork, and Glenn is in the process of scraping up to the second level to get a hat on Dont'a Hightower in the still below. Urbik is pulling from right guard to lead Spiller into what looks like a gaping hole.

Wondering where Urbik disappeared to on this play? I had to rewind twice to watch this: he just sort of ran into Glenn's backside. If he gets up to Gregory on this play, that's a big gain for Spiller. Instead, the unblocked safety closes the gap, and the play is blown up.

This run was designed to go off-tackle to the left, and that's where Spiller is headed in the still below. Chandler Jones does a nice job setting the edge working against Glenn, though you'd do well to note that he's got a hand squarely in Glenn's face - a penalty which the Bills were flagged for twice. That contain defense kept the play bottled up. 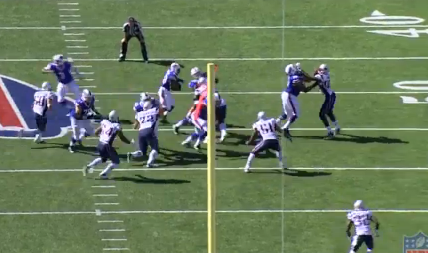 This is a fun one. Stevie Johnson spent the vast majority of Week 1 lined up in the slot, and on this particular run, he and Robert Woods are moving across the formation to the left as Spiller's run action heads to the right. (You can expect the Bills to build off of this action in future games, by the way.)

Johnson and Wood are the issues on this play. Wood, moving to his right, doubles down on Wilfork with Urbik. It looks below as if he's effectively sealed the defensive tackle off, right? Wrong. 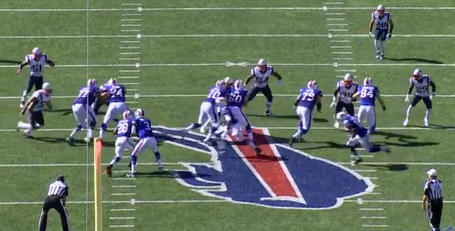 Boom. Wilfork is already back across Wood's face working into the running lane as Urbik scrapes to the next level. (Notice the theme here? Pats defensive linemen were clearly prepared for this type of blocking scheme from the Bills.) That forces Spiller back to the left, where Johnson is responsible for a backside seal on Ninkovich. Obviously that's a disaster of a blocking mismatch, but it wouldn't have even been a factor had the interior line been able to handle Wilfork. 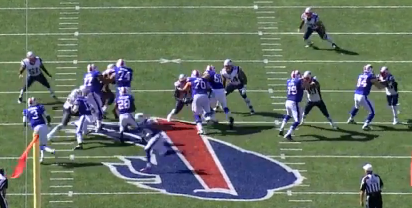 As the handoff is being made, Wilfork is moving to Brown's right - but that isn't necessarily a bad thing, as Glenn moves to the second level to take on Hightower. There is a crease developing between Glenn and Brown - albeit a small one, but potentially big enough for Spiller - and Mayo is away from the play. 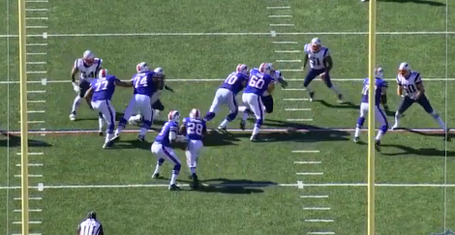 The point is moot, because two Bills blockers take out one defender allowing Mayo to get back into the play, but it doesn't help the issue at all that Spiller is tripping over his two linemen's ankles.

To my eye, a large combination of factors went into Spiller's day. He did not look as sharp as usual cutting, and missed some opportunities with his eyes as he appeared to be pressing the issue from time to time. Mostly, however, it looked like the Bills simply weren't blocking particularly well for No. 28 up front. They struggled in particular with Wilfork, who continually closed down running lanes. The run blocking execution was sloppy, but it's not as if it was bad scheming - there were opportunities for much bigger chunk runs that were left on the field.

Things may not get much easier for Spiller in Week 2, when he faces a Carolina Panthers defense that held the more physical Marshawn Lynch in check (17 carries, 43 yards) in Week 1.