In a wide-open AFC East race, the Bills and Jets square off in Week 3 looking to establish themselves as playoff contenders. The winner of this game moves to 2-1 overall and 1-1 in the AFC East. The loser of this game falls to an early 0-2 hole in the division. Both teams play the same defense, and both teams field rookie quarterbacks. Expect a hard-fought battle in Jersey. This is our extensive preview of a new chapter in the Bills/Jets rivalry.

No game played in Week 3 is a must-win for any pro football team, but the Buffalo Bills and the New York Jets may as well consider it that way when the teams face off tomorrow afternoon at MetLife Stadium. Both clubs enter the contest with a division loss in hand - to the New England Patriots, no less - and avoiding an 0-2 start may be imperative if either franchise harbors serious playoff aspirations.

Since the NFL re-aligned its divisions to four teams apiece in 2002, 132 teams have made the playoffs. 107 of those - 81.1 percent - made the post-season with four or more wins in division contests. The loser of this week's Bills/Jets game will fall to 0-2 in the AFC East; unless either ran the table against the Miami Dolphins and the two division rivals to which they had already lost, their playoff chances would diminish significantly.

Of the 25 teams that made the playoffs with a .500 or worse record in the division in the past 11 years, just six (4.5 percent) finished with a losing record; all were 2-4. One such team made the playoffs every season between 2006 and 2011: Dallas, Jacksonville, Philadelphia, the Jets, Kansas City and Cincinnati, respectively. In a hole at 0-2 and facing a difficult division slate for the rest of the season, the loser of this game may be reduced to hoping for this kind of post-season entrance with a loss - and those odds are incredibly slim.

Keep up with all of our Week 3 coverage

This Bills/Jets matchup offers a curious dichotomy between similar on-field elements and completely different off-field situations. Most of the pre-game focus has centered around the two rookie quarterbacks set to start (EJ Manuel for Buffalo and Geno Smith for New York), and the inaugural defensive chess match about to be played between years-long allies in Rex Ryan and Mike Pettine.

Both teams have already lost to New England by one score, and both have registered a one-point win over a NFC South also-ran - victories secured in the final seconds on their home turf, and even on drives aided by a key penalty. Add in the rookie quarterbacks and the fact that each team is running the same exotic, attack-first defense, and it's tough to ignore just how similar the start to the 2013 season has been for the Bills and Jets.

That said, there's no question that from a broader perspective, these franchises are perceived to be heading in opposite directions. Manuel is a week removed from engineering a game-winning two-minute drive in his second pro start, while Smith has struggled mightily with turnovers and sacks. The Bills have a new GM and a new head coach in place, and the current regime is here for the foreseeable future, while Jets observers are seemingly counting the days until GM John Idzik fires Ryan and begins a re-tooling of the Jets' on-field product.

Those observations don't matter in this contest, though. Or at least, they shouldn't. What does matter is that two clubs very similar in style will be attempting to exploit weaknesses that both share.

In the latest episode of the Buffalo Rumblings Podcast, we recap the Bills' comeback win over Carolina and preview the Jets game. Give it a download, and let us know what you think of the show!

No matter how skeptical anyone remains about Manuel's long-term prospects as a pro quarterback, no one is arguing that he's had anything other than a surprising, efficient and occasionally thrilling start to his NFL career. Through two games, he's completing 68.2 percent of his passes at 6.8 yards per attempt with three touchdowns, one interception and a quarterback rating of 95.9. In doing so, he's become the first rookie quarterback since 1960 to post a rating of 89 or higher in his first two games.

It's worth pointing out, however, that we haven't yet seen Manuel perform against a defense as aggressive as Ryan's. Manuel has been sacked just once through two games - he lost a fumble on that play, by the way - and while his offensive line deserves some credit there, New England and Carolina did not exactly dial up a ton of blitzes against the rookie. That will change in Week 3, and given Ryan's track record against freshmen signal callers, it's fair to expect a much sloppier performance from the No. 16 overall pick this past April.

That said, the Bills do have one advantage in this matchup that the Jets can only do so much to contain: C.J. Spiller. Coming off a 16-carry, 103-yard performance in last week's win, Spiller will look to continue his strong play agains the Jets from a year ago. In two 2012 performances, Spiller accumulated 325 yards of total offense and two touchdowns - both of which went for longer than 50 yards. Buffalo has a deeper stable of skill talent than they've had in a while, but both teams know that Buffalo's offensive success will be sparked by Spiller's effectiveness. 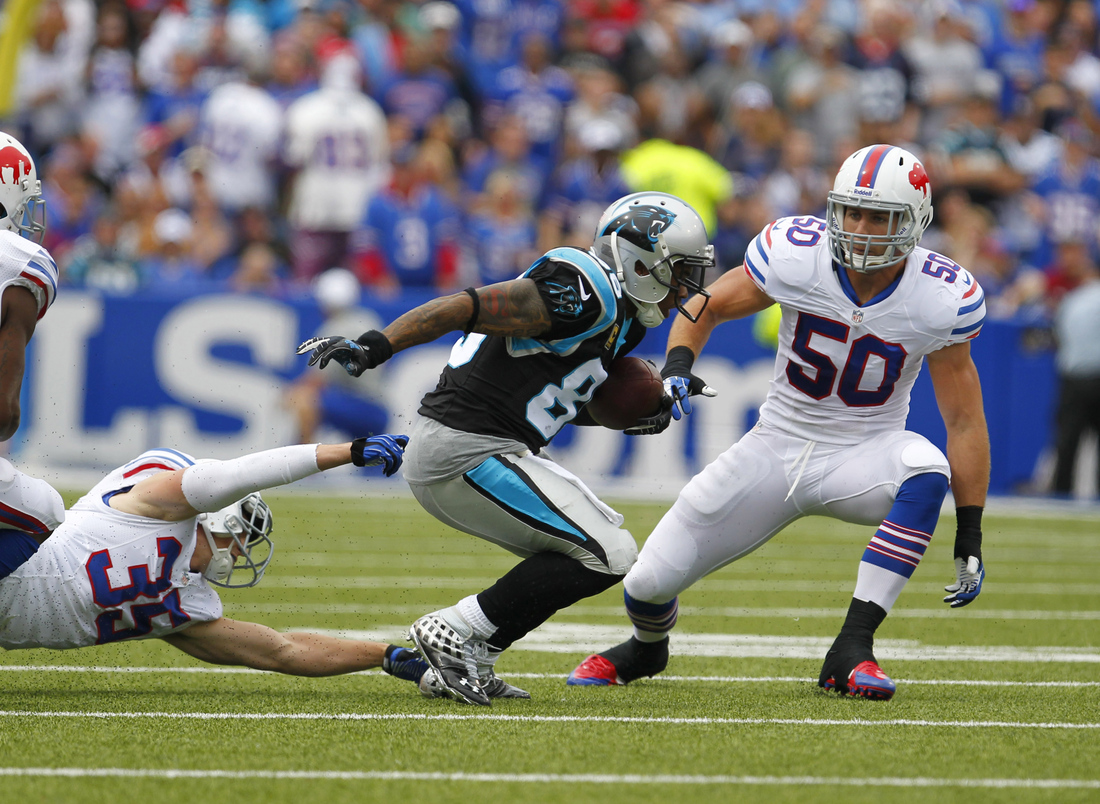 Smith has had a rough go of it to this point; in two games, he's completing just 53.4 percent of his throws at 6.4 yards per pop with one touchdown, the aforementioned five turnovers (four interceptions and a lost fumble), nine sacks taken and a 55.2 quarterback rating. He has struggled.

That said, he hasn't had an awful lot of help, either. The team's new running back tandem of Bilal Powell and Chris Ivory has managed just 3.1 yards per carry splitting 47 rush attempts. Jets receivers dropped six passes in their Week 2 loss to New England. Smith takes the majority of the negative press, but the Jets' skill players need to be better - starting with the team's running game, which is a young quarterback's best friend. Playing against a Bills run defense that's surrendering 4.3 yards per rush, they should have opportunities to keep the Bills honest as they tee off on Smith.

There's little question that the weakness of Buffalo's defense is its secondary, where top cornerback Stephon Gilmore remains sidelined with a wrist injury and free safety Jairus Byrd is questionable to play with plantar fasciitis in both feet. Justin Rogers, Gilmore's replacement in the starting lineup, is susceptible to giving up the deep ball, as he did to the tune of a 40-yard score against Carolina. There's even upheaval at the nickel spot, where Ron Brooks is recovering from foot surgery. Jeremy Kerley is a name to watch for the Jets; the slot receiver is returning to the lineup and had a monster game against Buffalo last season, with 45 yards and a touchdown (plus a 68-yard punt return for a score) in Week 1.

Buffalo's goals will remain the same as they've been in previous weeks: contain the run, make the opponent one-dimensional, and tee off on the quarterback. The hope this week is that the rookie quarterback will make more mistakes, but they'll need to take care of the basics first.

We've already covered the different trajectories that Manuel and Smith are on quarterbacking their respective teams as rookies. As throwers of the football, however, they're much closer as prospects: Smith has made some outstanding throws down the field that his receivers haven't been able to make plays on, while forcing too many throws as well; Manuel has thrown some beautiful balls himself, but has also lobbed a few head-scratchers that left a lot of yardage on the field. Flip through the gallery above to see multiple examples of each from both players, and leave your mouse hovered over the photos for explanations.

Delayed blitzing is a hallmark of the defense that you'll see on the field for every snap of this contest. In Buffalo, Pettine likes to send rookie middle linebacker Kiko Alonso on such pressures, and the second-round pick has proven himself adept at it. Once again, flip through the gallery above for diagrams and descriptions on how the Bills utilized these pressure packages to not only mirror Carolina's dangerous running backs, but also to contain a mobile quarterback in Cam Newton.

Stephen Hill: For all that's said about the Jets' lack of proven skill talent, Hill is most definitely a name that Bills fans will remember. In his pro debut last season, Hill hauled in five passes for 89 yards with two touchdowns in a 48-28 Jets win. At present, Hill is the Jets' leading receiver through two games, with 125 receiving yards on 10 receptions. He's still a hit-or-miss prospect - he has a few drops and a lost fumble to his name already - but when he hits, the 6'4" speedster can be a nightmare matchup. He'll draw Rogers most of the time on Sunday.

Damon Harrison: Massive defensive linemen Vince Wilfork and Star Lotulelei have given the Bills fits in their first two games. Starting left guard Colin Brown, in particular, has struggled with these assignments, but the interior across the board has had some issues moving larger defensive tackles to consistently open up running lanes. Muhammad Wilkerson gets most of the ink for the Jets on the defensive line, but you'll have a hard time missing nose guard Damon Harrison (6'4", 350) when he's on the field. A designated run-down defender, Harrison is off to a great start this season, registering nine tackles on 60 snaps in the Jets' first two games. He'll be charged with helping the Jets control the point of attack as the Bills try to establish Spiller and Fred Jackson on the ground. 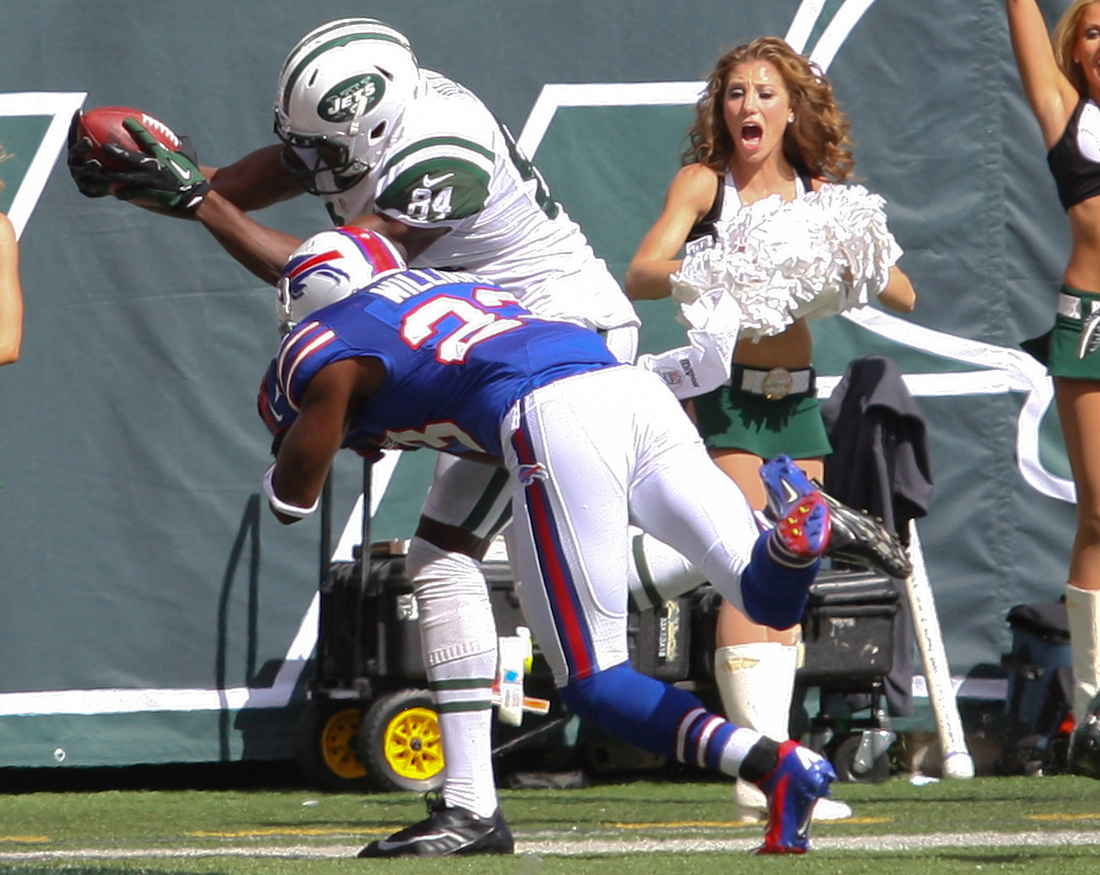 Scott Chandler: Virtually omnipresent on the field in the Bills' new offense, Chandler has struggled more than any other Bills player to build chemistry with Manuel. The two have missed a few notable opportunities for big plays in the first two games, and Chandler has looked uncharacteristically shaky catching the football this season. He has just 48 receiving yards this season. Still, as the season progresses, Chandler's level of play should improve - and if he continues to get open the way he has thus far, when things start to click he'll have at least one big day statistically.

Nickell Robey: Drawing the assignment of covering the aforementioned Kerley, the Jets' most reliable receiver, is Robey, an undrafted rookie out of USC that has played more snaps for Buffalo than No. 9 overall pick Dee Milliner has for the Jets this season. Robey is a top-notch athlete that plays much bigger than his size (5'7", 165), but the smooth and well-built Kerley (5'9", 188) might give him more trouble than he's experienced to date. Robey nearly made a great diving interception against Carolina, and there is some playmaking upside with this player; his matchup on Sunday will be one to watch.

The Bills and the Jets share so much in common that it's easy to overlook the obvious: in what shapes up to be a defensive battle with green offenses trying to make enough plays to win, the team that protects the football the best dramatically increases their chances to win. Doing the small things right - avoiding penalties, winning the turnover battle and moving the chains on third down (or preventing the opponent from doing so) - will matter a great deal in this game precisely because it's likely to be low-scoring. Assuming a virtual wash on that front - which we realize is certainly not a safe assumption, but it's certainly achievable - we like the Bills in this one given their more explosive playmaking ability on offense - but really, this might be a 50-50 proposition on Sunday. Bills 17, Jets 13