Three games into the 2013 season, the Buffalo Bills are banged up on defense, struggling on offense, 0-2 in the division and looking to avoid an 0-3 start in the AFC when they take on the defending Super Bowl champion Baltimore Ravens in Week 4. This is our extensive preview of a game in which the Bills, in the court of public opinion, aren't expected to seriously compete for a win.

For the second time in the 2013 season, the Buffalo Bills are preparing for a home game coming off of a gut-wrenching loss. In Week 2, the team was looking to rebound from a last-second 23-21 loss to the New England Patriots in the season opener. When they take the field at Ralph Wilson Stadium tomorrow afternoon, they'll be looking to bounce back from dropping a 27-20 decision to the New York Jets on the road - a game that the Jets did their best to give away via two turnovers and 20 penalties.

In that loss, many of this young Bills team's flaws were exposed - starting with developing quarterback EJ Manuel and ending with an injury-ravaged secondary that gave up huge plays to the Jets. They only lost by a touchdown, but Manuel was sacked eight times in by far his worst pro performance to date, and Mike Pettine's defense surrendered 518 total yards of offense, including a rookie 300-yard passer, two 100-yard receivers and a 100-yard rusher.

Bouncing back will be much more difficult than it was against the Carolina Panthers in Week 2: this week they play the Baltimore Ravens, who happen to be the NFL's defending champions.

Keep up with all of our Week 4 coverage

Prior to the Patriots, the Bills squared off with Brett Favre and the Green Bay Packers in 1997, less than a year after their win over Bill Parcells' Patriots in Super Bowl XXXI. Buffalo lost that game, a regular season finale - and the end of an era, as it was the final game in which Marv Levy served as Bills head coach.

When was the last time the Bills beat a defending Super Bowl champion? You may fondly recall Week 4 of the 1996 season, when Emanuel Martin picked off two Troy Aikman passes in a 10-7 Bills win over the Dallas Cowboys. It's by no means the Bills' top priority tomorrow, but they could end a seven-game losing streak (over a 17-year period) to defending champions by beating the Ravens.

The Bills need to get their running game going - again - and will try to do so against a Ravens run defense that currently ranks No. 4 in the NFL, allowing less than 75 rushing yards per game.

In the latest episode of the Buffalo Rumblings Podcast, we recap the Bills' gutting loss to the Jets and preview the Ravens game. Give it a download, and let us know what you think of the show!

Aside from a strong performance in Week 2, C.J. Spiller has been rendered a non-factor in losses to New England and New York. Combined, he's rushed for 50 yards on 27 attempts in those two contests, with the Bills failing to successfully get him out on the edge of the defense, and Spiller frequently finding running lanes closed inside and bouncing runs fruitlessly to the outside. Of all the frustrating things the Bills have or haven't done through three points, watching Spiller struggle ranks near the top of the list - and while Fred Jackson has picked up the slack nicely, this offense seems to go as Spiller goes.

Buffalo's struggles at the point of attack have been an issue not just in the running game, but against the pass. Cordy Glenn has been virtually flawless through three games, but every other blocker - left guard Colin Brown especially - has been susceptible to lapses in play, leading to pressures on Manuel and running plays blown up in the backfield. A highly talented Ravens defensive front featuring, among others, star tackle Haloti Ngata won't help that issue on Sunday.

Without the aid of a running game, the Ravens are likely to make life tremendously difficult for Manuel the way the Jets did a week ago. Led by perhaps the NFL's best pair of edge rushers in Terrell Suggs and Elvis Dumervil, the Ravens don't need to blitz to create pressure - but they do it anyway, and particularly against unproven quarterbacks (see: Brandon Weeden in Week 2). If the running game isn't clicking, and if Nathaniel Hackett can't find a way to combat pressure looks with screens and the like, it'll be another long day at the office for Manuel - particularly since the Ravens' excellent secondary, led by cornerbacks Lardarius Webb, Jimmy Smith and Corey Graham, is more than capable of erasing the Bills' young receiving corps. 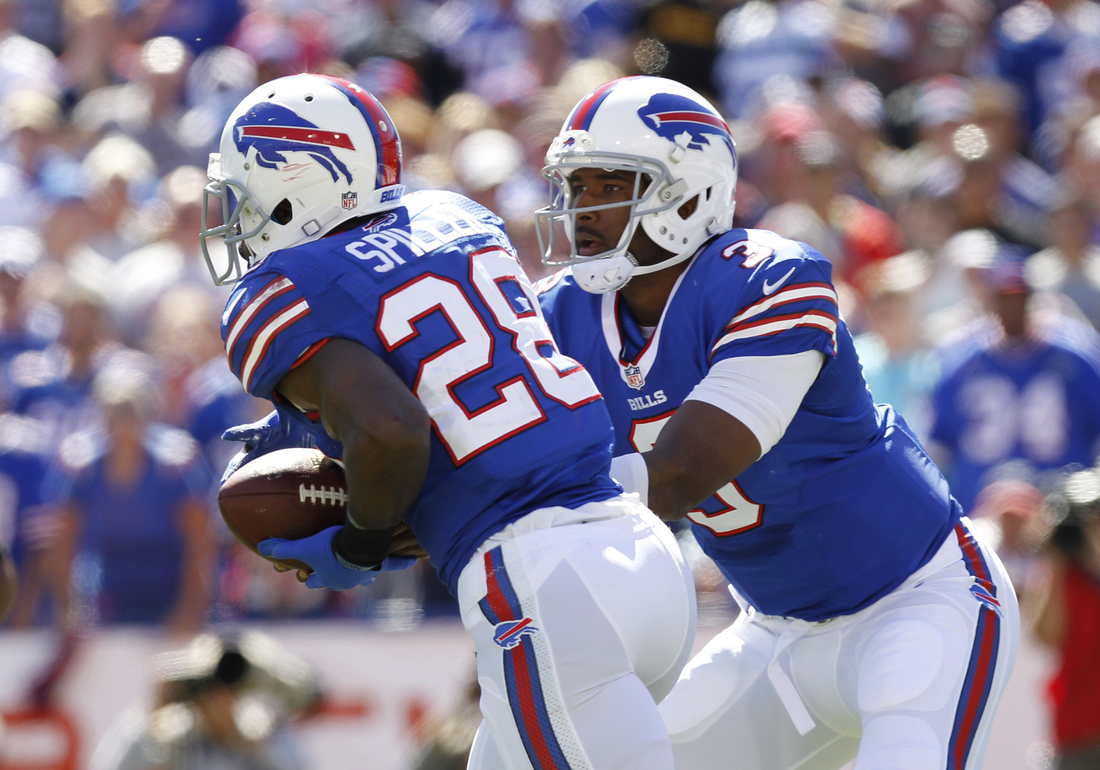 Ray Rice, Baltimore's star running back, is a game-time decision for this contest coming off of a Week 2 hip injury that has already cost him one game in the lineup. Rice has a very capable backup in second-year runner Bernard Pierce, who despite averaging just 2.8 yards per carry this year has scored a rushing touchdown in each of his last two games with Rice out of the lineup.

Buffalo has had long stretches of sound run defense in all three of their games this season, but missed tackles and gap breakdowns have led to a lot of big runs - particularly against the Jets. Their pass rush has also been spotty at best - it was excellent against Carolina, and only occasionally relevant in the two losses - and with Stephon Gilmore and Ron Brooks already out, and Leodis McKelvin and Jairus Byrd iffy bets at best to dress, the Bills will need to be especially good at pressuring Joe Flacco to prevent he and Torrey Smith from lighting this defensive backfield up the way Geno Smith and company did a week ago.

Bilal Powell became the 56th running back to surpass 100 rushing yards against the Bills during their playoff drought last week. We took a detailed look at precisely how the Bills continually gave up big runs to such an average back; you can flip through the gallery above to see the Bills losing contain and playing with poor gap discipline, which would allow any old back to rip off huge chunks of yardage.

If you caught the loss to the Jets, you likely grew frustrated as Manuel repeatedly lobbed softballs out of bounds up the sideline in the face of pressure against the Jets' pressure looks. Flip through the gallery above and take note that most of the throws came against the exact same Rex Ryan scheme - then don't be surprised if Ryan's former employers borrow the looks for certain situations that will arise tomorrow.

WR Marlon Brown. Leave it to Ozzie Newsome to find an undrafted rookie receiver that can handle the pressure of not only sliding into the lineup as a rookie, but effectively replacing departed veteran Anquan Boldin. Jacoby Jones, the Ravens' second receiver, remains sidelined with a knee injury, leaving Brown - who played at Georgia - as the starter opposite go-to target Smith. Though he only caught two passes in a 30-9 drubbing of Houston last weekend, Brown caught 10 passes for 110 yards and two scores in the Ravens' first two games this season. Given how beat up the Bills are in the secondary - and given their likely emphasis on trying to slow down Smith as much as possible - Brown stands to see a lot of targets from Flacco.

DL Arthur Jones. Suggs and Dumervil dominate the attention in the pass rushing department, and Ngata steals the thunder along the defensive line. Watch Ravens tape from the past two weeks, however, and Jones - who played his senior season under Doug Marrone at Syracuse, by the way - is a standout. Now a starter in his fourth NFL season, Jones enters this contest with a sack in each of the last two games. He has flashed dominance when singled up (which happens a lot given the talent around him), and has a bit of playmaking flair to him. Keep an eye on No. 97 tomorrow afternoon. 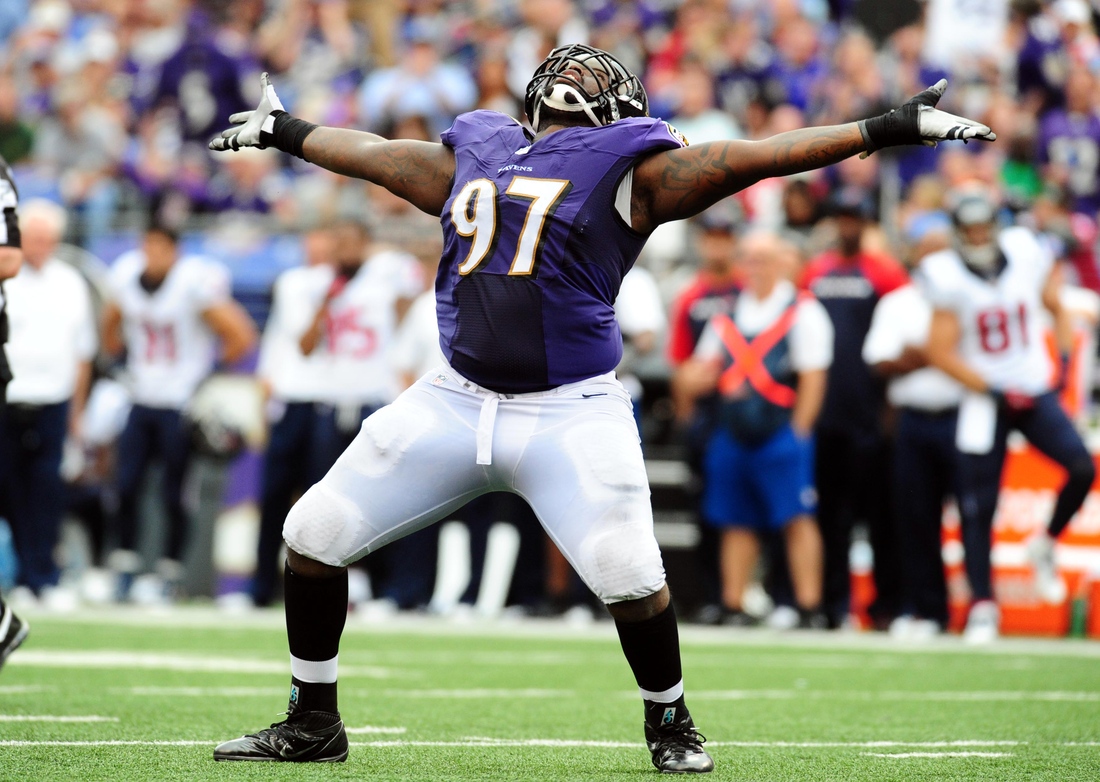 TE Lee Smith. You won't see us mention Smith much, because he's not typically a guy you notice on the field. A blocking specialist through and through, Smith plays an important role in two tight-end sets, where the Bills essentially use him as a third tackle. That may come in handy against Baltimore; the aforementioned Glenn will likely be asked to handle Dumervil on his own, but Suggs lining up across from Erik Pears is a mismatch that heavily favors Baltimore. Don't be surprised if the Bills counter by using a lot of two-tight end formations, leaving Smith on the field to help Buffalo's tackles try to handle Baltimore's star pass rushers. Smith may be as important as any skill player the Bills have on Sunday, which won't happen often.

OLB Jerry Hughes. It should surprise no one that Buffalo's pass rush has fluctuated along with Mario Williams' level of play this season. What is a bit surprising is that the Bills haven' had a second pass rusher step up and be a consistent force, either along the defensive line or at linebacker, through three games. Hughes, the Bills' designated pass-down edge rusher, is still receiving plenty of opportunities to make an impact in that role, but hasn't done much to date (0.5 sacks). Playing against aging veteran Bryant McKinnie, Hughes will have his best opportunity to make plays via a pure speed rush tomorrow.

The Bills and the Ravens have very similar goals entering Week 4: establish the run to set up the pass on offense, and stop the run to force the issue against the pass on defense. It's not difficult to imagine the experienced Ravens having an easier go at those objectives, particularly given the way the Bills struggled a weak ago. Unless the Bills can match Baltimore in those two departments, plus improve dramatically in the red zone, on third downs and in the turnover battle, the Ravens are a clear favorite here. Ravens 27, Bills 16