It's looking like Jairus Byrd's Bills career is over. What can fans expect from a safety position featuring Aaron Williams as the top dog, and within a new scheme coordinated by Jim Schwartz?

Now that it appears Jairus Byrd will not be a member of the Buffalo Bills in 2014, we have to look at what is left at the safety position. Namely, who will step into Byrd's role as the team's proverbial center fielder?

That question would be easier to answer if the Bills were staying with the same defense, as we could look at how the Bills played when Byrd was missing time last season. However, the Bills have a new defensive sheriff in town, and his coverages will be a bit different than those we saw last year.

Under previous defensive coordinator Mike Pettine, the Bills did a bunch of matchup stuff underneath, but usually had Byrd playing deep to make sure nothing bad happened. For a quick example, I took a look at the Jacksonville Jaguars game and charted the team's deep safety tendencies. Why the Jaguars game? Because that was Aaron Williams' best game of the year, and he is the guy most people are thinking will take over for Byrd.

According to my viewing (which can be incorrect at times because I do not know the play call), the Bills did the following on plays where it was an obvious pass (passes, sacks, scrambles, and penalties):

(There was also one play with a sufficiently strange alignment that it was difficult to tell how many safeties the team had drawn up to play deep.

What does all of that mean? To me, it says the Bills were extremely comfortable allowing Byrd to play center field and have everyone else do whatever. Meaning we commonly saw coverages like this: 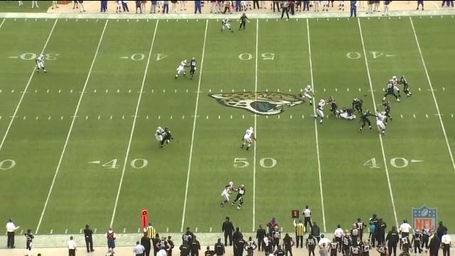 (Williams recorded his interception on the above play.) 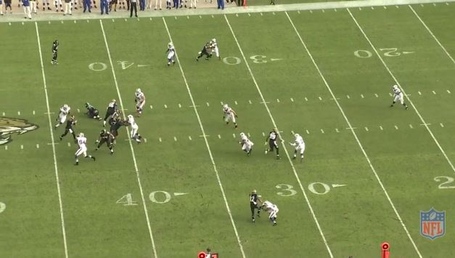 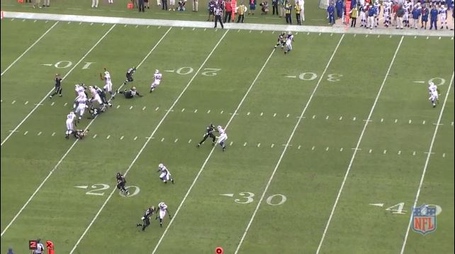 There is nothing special about the plays shown above; they are just good examples of the Bills doing stuff with the other 10 defenders while Byrd sat back deep in case anything bad happened.

This is what made Byrd such an asset: he was one of those guys that you could leave back there by himself and be comfortable that he's got things on lockdown. It's very similar to how the Seattle Seahawks use Earl Thomas. The bad news is that guys that can do that are tough to find.

Which brings me to Williams, who like Byrd was a cornerback in college and has switched to safety in the pros. Last year, he was most definitely the matchup coverage safety rather than the center field safety. The question to ask about Williams, then, is this: can he switch and become that deep safety?

I do not think he'll have to. The Detroit Lions, previously coached by new Bills defensive coordinator Jim Schwartz, really were not a single high safety team. They played a lot of Cover 6, meaning that they would play quarters coverage on the strong side and Cover 2 on the weak side. This coverage kept both safeties back; if Schwartz plans on continuing that trend, a true center fielder playing safety is not a necessity. I believe that Williams will continue to grow and become a good player with the Bills. However, I also believe he is best as he was used last year: closer to the line of scrimmage, playing man coverage and curl hook zones rather that deep (similar to how the Green Bay Packers used Charles Woodson). That isn't to say he can't do it; I just don't think he will be asked to.

What will happen is anyone's guess, but I am of the mind that due to the new defensive coordinator the free safety position will not be as high a priority once Byrd inevitably signs elsewhere.