Joe Valerio (The Sports Reporters) sets out to write the definitive book on the Buffalo Bills and their four straight Super Bowl appearances.

Share All sharing options for: Review: 'Second to None' by Joe Valerio covers Super Bowl Bills

I had the pleasure of reading through a review copy of Second to None: The Relentless Drive and the Impossible Dream of the Super Bowl Bills - a book authored by Joe Valerio, which hits bookshelves next week, chronicling the legendary Buffalo Bills teams of the early 1990s - in early August, on the very day that one of those teams' greatest performers, Andre Reed, was surrounded by his former teammates as he was inducted into the Pro Football Hall of Fame.

Valerio, the producer of ESPN's The Sports Reporters for over two decades, set out to write a book about, in the words of ESPN's Adam Schefter, "the greatest team never to win a Super Bowl." In doing so, he interviewed more than two dozen former players, coaches, reporters, and even fans, his goal to capture the pride and the bittersweetness of those four fateful games.

In that, he more than succeeds. Among the most compelling and agonizing chapters, Valerio sprints from viewpoint to viewpoint in Tampa - from Bill Polian and Marv Levy on the sidelines, to Frank Reich on the hold, to fans Ange Coniglio and Dennis DiPaolo seated in the stands - gathering people's recollections as Scott Norwood's kick sails wide right. These are familiar moments for any Bills fan, re-lived in graphic detail through the eyes and minds of the men involved. They are gripping and heartbreaking tales, and are the main reason that this book is one that every Bills fan will want to read at some point.

The book also does an excellent job of fleshing out what those teams meant to the region. The tale begins in the basement of Jim Kelly's house, mere hours after the Bills had disposed of the Raiders, 51-3, in the AFC championship game. There, players and their friends and families celebrated their win and considered, in awe, the journey they were unknowingly about to begin. 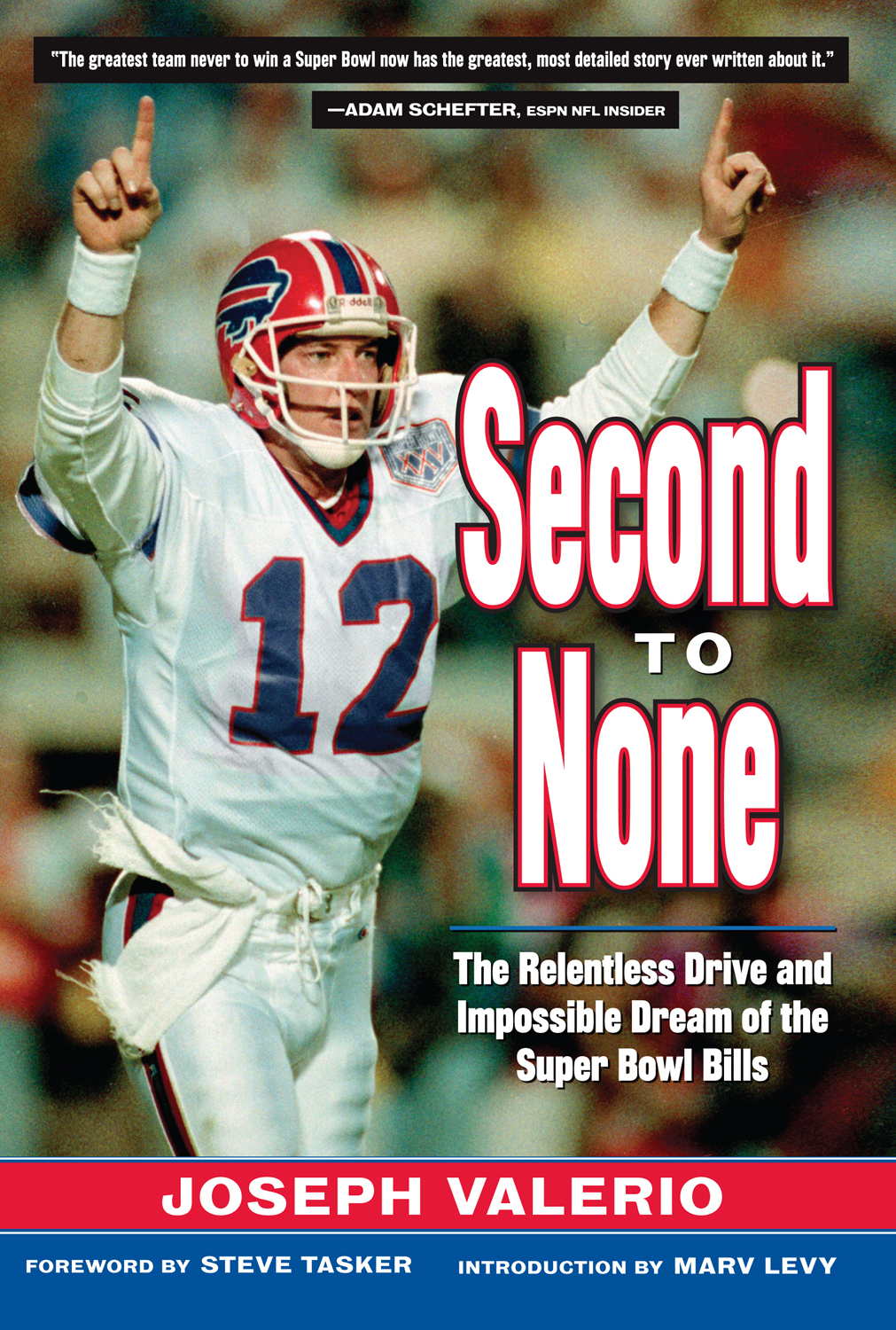 Norwood's legendary post-kick reception back in Buffalo is highlighted; that moment still stands as one of the greatest feats of collective human character in the history of sport. Coniglio, DiPaolo, and non-team members interviewed, situated on the periphery of those teams in various ways, provide a key link back to the fan base, and thereby the reader.

Don Beebe is praised for the Leon Lett play. The infamous Comeback Game, Levy's ability to rally the troops despite big loss after big loss, and several other highlighted qualities feed into a "these Bills, their fans, and this region had heart and pluck" theme - and just when the reader begins to feel a swell of pride, Valerio expertly weaves in a quote from Bill Parcells or, especially, Jimmy Johnson to recapture that despondent, pissed-off feeling we became so accustomed to feeling at the ends of those glory years.

Bills fans - especially those old enough to have seen those teams with their own eyes - will thoroughly enjoy this read. I'm not sure, despite Valerio's efforts, that this is an accessible work beyond that core group. At the halfway point of the book, you'll have just finished reading about the Norwood kick; the focus on the Super Bowls, and a small sampling of key games it took to get to them, gloss over a lot of the regular season and playoff accomplishments that made those teams great. That's information well-known to Bills fans, but not necessarily to the general NFL fan (or even a young Bills fan) that's trying to learn more about one of the best teams in pro football history.

There's also an editing issue. My review copy may not have been the final product to hit bookshelves, so keep that in mind; I'll also admit, as a full-time editor, that I can be a bit too picky about grammar and formatting issues. The copy I read had those, and most will forgive those more easily than I did. But if you pick up this book and still see Zubaz referred to as "Zumba pants," don't say you weren't warned.

If you're picking up this book hoping for a comprehensive anthology of the 1990s Bills, you'll leave disappointed. But don't let that deter you; this is an effort to highlight the assembly of those teams and the people involved, the character and effort required to pull off such a monumental feat, and how all of that will forever transcend the sting of four straight losses. You'll re-acquaint with characters you miss - I'm speaking of you in particular, Darryl Talley, whose salty language brought welcome levity in the more forlorn moments of the book - and re-live the best times of your sporting life. Valerio's book may not be for everyone - someday, there should be a book that truly connects the general NFL fan to these teams that they still mostly use as a punchline - but it is, without a shred of a doubt, a must-read for Bills fans.