Brian Hoyer is an attractive name on the free agent market to many Buffalo Bills fans, but there's one basic reason that the team should be wary of signing him.

Brian Hoyer ranks among the more desirable quarterback options sitting in 2015 NFL free agency, should he not re-sign with the Cleveland Browns. (Given that they signed Josh McCown last week, Hoyer returning to Cleveland does not seem especially likely.) This sounds about as damning for this year's free agent quarterback class as anything, but that's where we are, and that won't stop us from examining the heck out of him to see if he's a fit for the Buffalo Bills.

Hoyer's 2014 season was a polarizing sample of play that can make him tricky to pin down. Would a change of scenery induce play from Hoyer like we saw from him against the New Orleans Saints or the Pittsburgh Steelers at home? Or would it bring the Bills some of the play Cleveland saw near the end of Hoyer's season, when he posted the worst three-game stretch in Browns quarterback history?

Before we get to Hoyer, let's think about what we can reasonably expect from a quarterback in this free agency pool.

Outside of turnover issues, which are prevalent pretty much with every free agent quarterback, we want a guy who can make first down throws. Deep passes are great, but they'll rarely be as prevalent in a game plan as hitting those five- and seven-yard passes to convert in that 3-7 yard range on third downs. Anyone planning to helm this offense should at least be proficient in that area, because that's where the running game will no doubt put the Buffalo offense on many occasions.

Unfortunately, short-range accuracy appears to be Hoyer's primary weakness. His overall completion percentage in 2014 was 55 percent, ranked No. 32 in 2014 among qualifying quarterbacks. Pass attempts thrown 1-10 yards in the air were completed at a 57 percent clip. That figure dips to 46 percent on passes thrown 11-20 yards. That's a 53 percent completion rate on all of Hoyer's passes thrown 20 yards or fewer in the air.

Jake Locker had a similar number of attempts to Glennon, completing 61 percent with 1-10 yards of air under his throws, and 62 percent on all throws traveling under 20 yards. Even Kyle Orton threw for 68 percent under 10 yards, and 62 percent in the 20-or-fewer range. The list goes on from there, but you're getting the point.

A look throughout the league puts the completion percentage you want in the 1-10 yard range at least in the mid-60s, and 60 or more from 20 and in. The best quarterbacks in the league all hit those figures, and plenty of quarterbacks in the middle do as well. Hoyer, who threw as many passes as any of those listed above, falls well short of that mark, however.

This is one quick example from one of Cleveland's best games last year to illustrate Hoyer's struggles, even when things are going well. 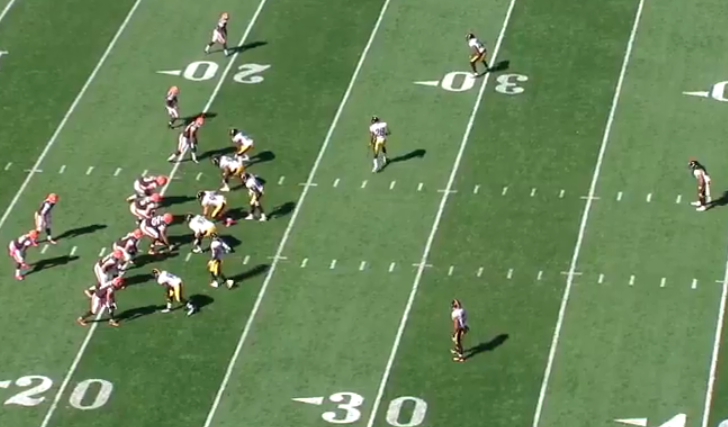 Above, we see the Browns lined up on 3rd-and-9. Andrew Hawkins just went in motion, so he's now settling in to the left of the line of scrimmage. He's going to sprint straight downfield, while Taylor Gabriel curls from the top of the screen to the middle of the field.

Here, the play has unfolded in Cleveland's favor. Hawkins takes a defender with him, while Gabriel curls inward short of the sticks, but with a little separation. To Hoyer's right, tight end Jordan Cameron is loosely covered beyond the sticks. A throw to Cameron's gut probably gets the first down, but Hoyer never looks his way. Instead, he's locked in on Gabriel, which isn't great, but okay. Maybe this can still work. Except, well... 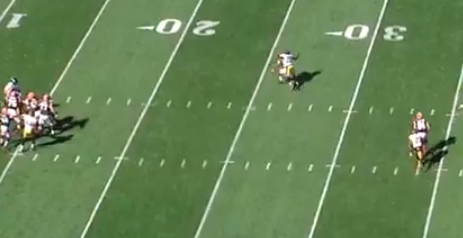 That picture is a little grainy, but the pass is not even close to Gabriel, who sits maybe six yards removed from the line of scrimmage. Not only does Hoyer choose a receiver who probably won't convert the third down, but he misses that receiver by a mile.

Hoyer actually sees a leap in completion in the 21-30 yard range, as he went 20-for-32 from that distance last season, which explains much of his success. Hoyer's yards per attempt actually rank in the Top 10 among qualifying starters in 2014, which is rooted in games like that above. It's from Cleveland's 31-10 home victory over Pittsburgh. Hoyer went 8-for-17 with 217 yards and a touchdown in that game. Of those 217 yards, 92 came on two throws to Cameron. He used big passes to bolster that yards per attempt figure, and keep his team in the game early in the season.

Such a strategy quickly dries up once opposing defenses catch on. Once they did, Hoyer threw interceptions like candy at a parade.

Short passes aren't everything, but they should provide a baseline for what the Bills could find on the open market. There may not be a dynamic quarterback who can hit every throw in stride, but the easy ones? Someone has to be able to hit those. Whoever can't should be immediately pared from the list.

Hoyer had some nice drives and showed a lot of heart at times in Cleveland, but at the end of the day, he threw more interceptions than touchdowns in 2014, and his strengths simply don't appear to match up with those required by the Bills. If Doug Whaley wants to sign him, he'll need to find some compelling reasons that outweigh these basic struggles.