Jim Schwartz replaces Mike Pettine in Buffalo, and while there are similarities between the two in terms of the mindset of their play-calling, their base defenses are quite a bit different.

Share All sharing options for: Comparing base defenses: Jim Schwartz vs. Mike Pettine

The Buffalo Bills moved quickly in replacing departed defensive coordinator Mike Pettine on Friday, officially bringing in former Detroit Lions head coach Jim Schwartz to coach the team's defense. The hiring has been largely praised - Schwartz, like Pettine, is known for an aggressive mindset, and his background in analytics meshes well with the team's organizational philosophy - but the Bills are looking at yet another system change on defense.

Pettine is known for mixing alignments and blending one- and two-gap techniques on any given play, with an end goal of disguise. Schwartz, who was the defensive coordinator in Tennessee for eight seasons, runs a mostly 4-3 base defense with his defensive ends lining up in a "Wide 9" technique in an effort to maximize their pass-rushing potential. Let's take a look at the differences between the two base defenses as we begin to better grasp what Buffalo's new defensive chief is all about. 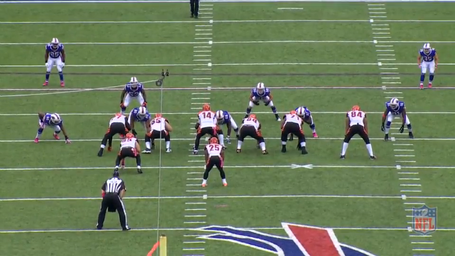 Buffalo and Detroit played against the Cincinnati Bengals and their productive offense in back-to-back weeks in 2013 - both teams lost 27-24 in overtime at home, believe it or not - so we can catch a glimpse of how both teams lined up against one of the Bengals' favorite formations, in which they play in an offset-I formation with two tight ends on the field. Tyler Eifert lines up in the backfield as a fullback.

The Bills' base defense is a 4-3 Under, in which their defensive linemen play "under" technique, away from the strength of the formation, and its linebackers play over the top of the formation. It looks like a 3-4 to the naked eye, and that fact lets the Bills flip between the two alignments with relative ease if they so choose. Below, take a better look at the 4-3 Under, noting that the blue triangles are the defensive linemen, and the red triangles are the linebackers. 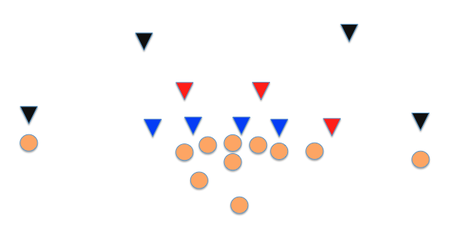 Below, we see Cincinnati in the exact same offensive formation the very next week, and the Lions' alignment is different. 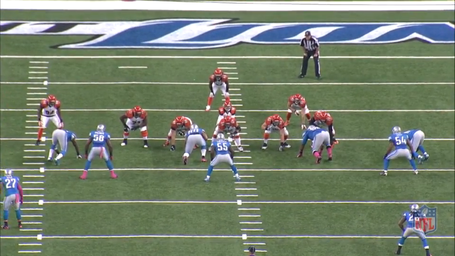 See the two defensive ends with their butts way up in the air? Those are the "Wide 9" ends. "Wide 9" simply means that the ends are playing wider than in a traditional 4-3 set, with the "9" referring to them playing the nine-technique well outside of the tackles' shoulders. That alignment creates much larger gaps on the line of scrimmage, and the linebackers set up quite differently as a result, as you can see below (blue triangles are the linemen, silver triangles are the linebackers). 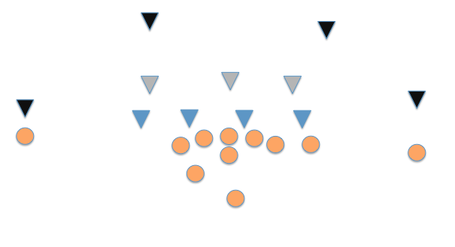 This looks much more like a true 4-3 than does Pettine's 4-3 Under. The strong-side linebacker, in particular, lines up completely differently thanks largely to the width of the rush end on the right side of the offensive formation. The middle and weak-side linebackers also shift more toward the weak side of the offensive formation in an effort to better control the wider gaps up front in the event of a run.

From a personnel standpoint, things are not radically different for five of the front-seven defenders. The two tackles are still playing one-gap techniques, and the right defensive end is still aligned quite wide with a rush-first, contain-second mindset. Small shifts in alignment for the middle and weak-side linebackers are not massive changes from the ordinary. Where things are different are at left end and strong-side linebacker.

Buffalo's base defense under Pettine used a "power" end over the strong-side tackle (here, the right tackle). Alex Carrington began the season in that role, and Corbin Bryant played it a lot after Carrington got hurt. Projected into the Wide 9 4-3, that player becomes largely useless as a pass rusher with limited to no range in run support. The player best-suited to play that role in the Schwartz defense is probably Mario Williams, who would have to deal with a tight end chip much more often than he did under Pettine as a result.

Manny Lawson could also play that position, keeping Williams on the weak side of the formation, but he was the strong-side linebacker for the Bills, and in that same role he'd be moving further off the ball under Schwartz. Pettine used Lawson off the ball quite a bit, particularly in nickel and dime sets - where Lawson would serve as the second coverage linebacker next to Kiko Alonso - but that's still a rather large fundamental role shift for the strong-side linebacker.

The question fans should be asking about Schwartz at this point is how committed he is to that Wide 9 alignment, which changes the roles of the strong-side players drastically, and how much he can bend his system to better fit the skills of players like Lawson, and to better free up Williams. We have more study to do of the Lions' defense under Schwartz - which was coordinated by Gunther Cunningham, who worked with Schwartz in Tennessee, for the record - but right now, it's easy to project the Bills' personnel needs list changing a bit on defense heading into the next few months.